Background: The Philippine Revolution and the Spanish-American War The Philippines (LEFT, 1898 map) was a colony of Spain from 1571 to 1898. Spanish rule came to an end as a result of the Philippine Revolution and US involvement with Spain's other major colony, Cuba.

The Philippine archipelago, with  a total land area of 300,000 sq km (115,831 sq mi), comprises 7,107 islands in the western Pacific Ocean, located close to the present-day countries of Indonesia, Malaysia, Palau and the island of Taiwan.

More than 170 dialects are spoken in the archipelago, almost all of them belonging to the Borneo-Philippines group of the Malayo-Polynesian branch of the Austronesian language family. Spanish soldiers in the Philippines. Photo taken in 1896. Spanish troops battling Filipino rebels in the undergrowth; photo taken in 1896 or 1897. The Cuban Insurrection broke out on Feb. 24, 1895.  The rebels were led by the poet Jose Marti y Perez, now considered as Cuba's national hero (LEFT).

The Cubans had set up propaganda in the United States to support their cause for independence; the Cuban community had built connections with senators, congressmen and with the press.

American business interests were perturbed by the tumult in Cuba;  in addition, public opinion in the US became aroused by newspaper accounts of the brutalities of Spanish rule. These reports were not exaggerated: between 200,000 and 400,000 Cuban civilians died from starvation and disease in Spanish concentration camps.

The 1890's were marked by mounting efforts in the United States to extend American influence overseas. These were often justified by references to Manifest Destiny, a belief that territorial expansion by the was both inevitable and divinely ordained; this belief enjoyed widespread support among U.S. citizens and politicians. They called for the to intervene on the side of the Cubans.

Governor Rivera was frustrated by his failure to crush the Filipino revolutionaries.  The government had already sent over 50,000 cazadores to the together with several artillery, cavalry, engineer and supporting units, way above the 20,000 troops that the Colonial government had originally estimated it needed to crush the uprising.

Rivera asked for more troops but the home government declined; massive commitment in the Cuban revolution had already tied down more than  150,000 soldiers. Reluctantly, he agreed to negotiate for a truce and perhaps even a settlement of the conflict with the Philippine Independence movement.

The colonial government and the Filipinos knew that to continue hostilities meant an inconclusive war of attrition. The standoff in the battlefield prompted both sides to explore the prospects of an armistice.  A mestizo lawyer, Pedro Paterno, volunteered to act as mediator between the two sides. For four months, he traveled between Manila and Biyak-na-Bato.

December 1897: Seated. L to R, Pedro Paterno, mediator of the Pact of Biyak-na-Bato, and General Emilio Aguinaldo. Standing, L to R, rebel leaders Isabelo Artacho, Baldomero Aguinaldo, Severino de las Alas, Antonio Montenegro and Vito Belarmino. (Paterno became one of the founders, and Montenegro a founding member, of the pro-American Partido Federal when it was organized on Dec. 23, 1900.)

On Dec. 14, 1897, the Pact of Biyak-na-Bato officially halted hostilities.

The Pact ordered Aguinaldo and other major revolutionaries to be exiled and live peacefully in Hong Kong, where they would be paid $800,000 in Spanish-Mexican currency (read as "pesos"; the symbol used for the peso was  "$", basically the same as for the US dollar). Spain would grant an "ample and general amnesty" to the remaining revolutionaries pending they forfeit their arms.

The Pact alluded to "the desire of the Filipino people for reforms", like the suppression and eventual expulsion of the tyrannical and oppressive Friars, secularization of the religious orders, and establishment of an autonomous political and administrative government. [By special request of Governor-General Rivera, these specific conditions were not put down in writing, owing to his assertion that otherwise the Treaty would be in too humiliating a form for the Spanish Government, while on the other hand he guaran- teed on his word as gentleman and officer the fulfillment of the same].

In conclusion, $900,000 was to be paid to the citizens of the Philippines, who suffered greatly from the effects of the war. Dec. 27, 1897: Emilio Aguinaldo and 36 other Filipino rebel leaders arrive in Dagupan, Pangasinan Province, in a railcar. From left: Gregorio del Pilar, Wenceslao Viniegra, Emilio Aguinaldo and Vito Belarmino. At extreme right is Pedro Paterno, who mediated the Pact of Biyak-na-Bato. From Dagupan, the exiles proceeded to the port of Sual, Pangasinan, where they boarded the merchant steamer SS Uranus; bound for HongKong Dec. 27, 1897. Emilio Aguinaldo and the other exiles boarding launches at the Port of Sual that took them to the steamer SS Uranus; they reached Hongkong on Dec. 31, 1897.

The Pact, however, was an empty promise for both parties; they were only biding time until they could launch another offensive. Spain had no intention to fully pay up or grant reforms. Comparatively, Aguinaldo planned to use the money to buy arms and ammu- nition and revivify the revolt. Thereafter, Spain actually delivered a mere $600,000 out of the $1,700,000 promised. Filipino prisoners were released on amnesty then rearres-ted on fabricated charges; more than two hundred men were executed. On the other hand, the arms turned in by the rebels consisted of old or broken rifles and pistols, and guns made of bamboo and wrapped in metal.

Two months later, on Feb. 14, 1898, the exiles effectively repudiated the truce when  they undertook to buy arms in Shanghai and Hong Kong to resume the revolution. It had become clear that, as expected, the Spanish authorities would not abide by the terms of the Treaty.  [Aguinaldo had also received a letter from Lt. Col. Miguel Primo de Rivera, nephew and private secretary of Governor Rivera, informing him that neither he nor his companions could ever return to Manila].

Then fate intervened on the other side of the globe. 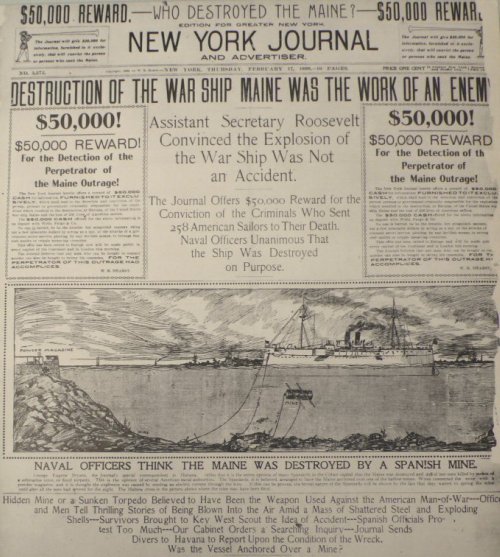 With no proof, purveyors of the "Yellow Press" accused the Spanish of blowing up the ship (although Spain had no motive for doing so). "Remember the Maine" became a call to arms for Americans. 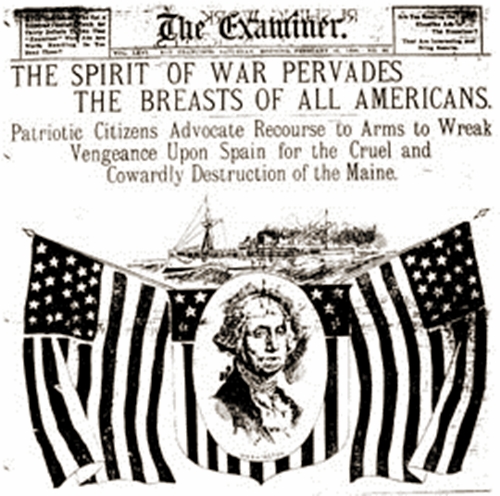 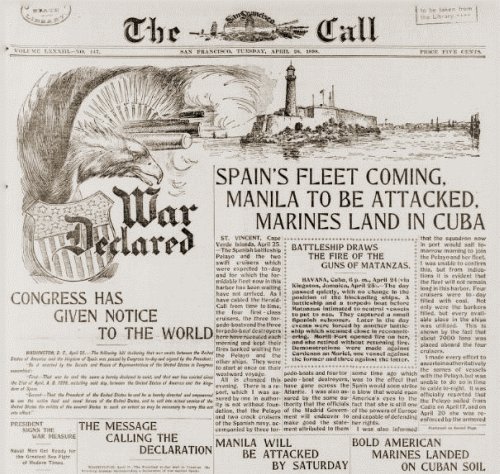 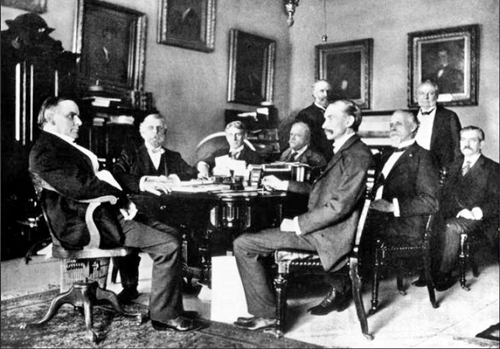