The USS Olympia at Hong Kong Harbor. Commodore George Dewey had his ships' brilliant peacetime white and buff schemes over-painted to war gray; this made them less conspicuous in battle. PHOTO was taken in April 1898. 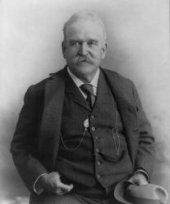 On April 22, 1898, the US Asiatic Fleet commanded by Commodore George Dewey was riding at anchor in the British port of Hong Kong. Navy Secretary John Davis Long (LEFT) cabled the commodore that the United States had begun a blockade of Cuban ports, but that war had not yet been officially announced.

On April 25, Dewey (RIGHT) was notified that war had begun and received his sailing orders from Secretary Long : "War has commenced between the United States and Spain. Proceed at once to Philippine Islands. Commence operations at once, particularly against the Spanish fleet. You must capture vessels or destroy. Use utmost endeavors." 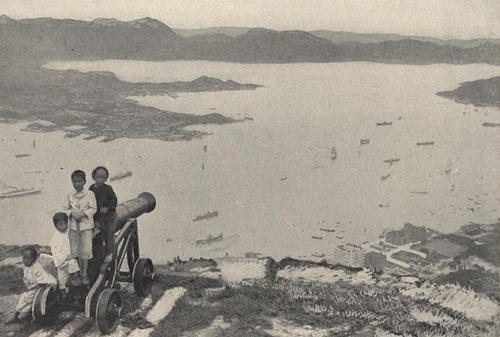 On that day, due to British neutrality regulations, the American squadron was ordered to leave Hong Kong (ABOVE, in 1898). While Dewey's ships steamed out from the British port, military bands on English vessels played "The Star-Spangled Banner," and their crews cheered the American sailors. 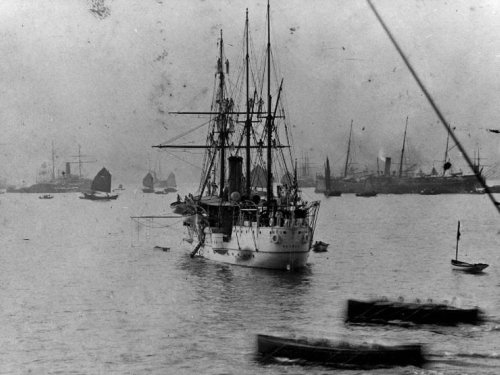 The USS Petrel at Hong Kong, prior to getting swathed in wartime gray, April 15, 1898

Commodore Dewey violated China's neutrality and anchored his fleet about 30 miles (50 km) down the Chinese coast, at Mirs Bay, and waited for further instructions. The squadron consisted of 1,744 officers and men, and 9 vessels: the cruisers Olympia, Baltimore, Raleigh and Boston, the gunboats Concord and Petrel, the revenue cutter McCulloch, and the transport ships Zafiro and Nanshan.

The Chinese did not bother to protest, and for two days the crews drilled with torpedoes  and quick-fire guns, and aimed their eight-inchers at cliffside targets on Kowloon Peninsula. 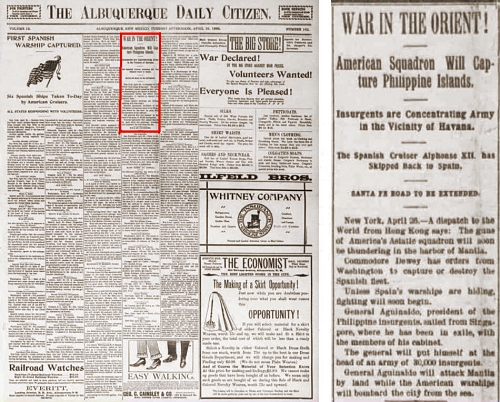 The New Mexico newspaper, dated April 26, 1898, reports that Emilio Aguinaldo had sailed from Singapore to head an army of 30,000 "insurgents" in the Philippines, and will attack Manila by land while American warships will bombard the city from the sea. 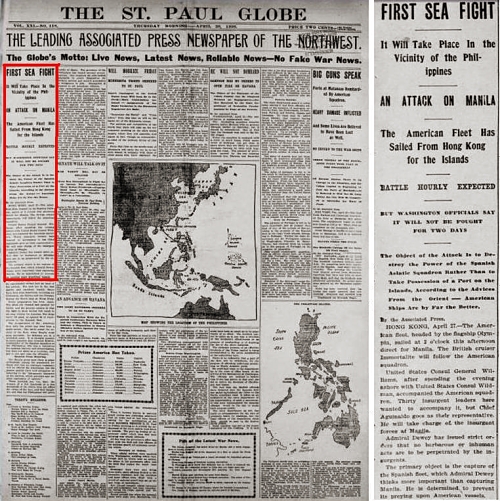 The Minnesota newspaper, dated April 28, 1898, reports: "Admiral Dewey has issued strict orders that no barbarous or inhuman acts are to be perpetrated by the insurgents." By "insurgents", he meant the Filipinos. Chart (LEFT) shows Dewey's battle track during the Battle of Manila Bay, with X's depicting the positions of the Spanish vessels. Contemporary satellite photo of the Cavite Peninsula. Cavite City is the current name of Cavite Nuevo. The city proper is divided into five districts: Dalahican, Santa Cruz, Caridad, San Antonio and San Roque. The Sangley Point Naval Base is part of the city and occupies the northernmost portion of the peninsula. The historic island of Corregidor and the adjacent islands and detached rocks of Caballo, Carabao, El Fraile and La Monja found at the mouth of Manila Bay are part of the city's territorial jurisdiction. 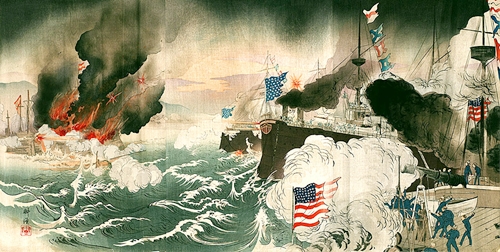 A Japanese woodblock print of the Battle of Manila Bay. Print courtesy of the MIT Museum. Commodore George Dewey (second from right) on the bridge of USS Olympia during the battle of Manila Bay. Others present are (left to right): Samuel Ferguson (apprentice signal boy), John A. McDougall (Marine orderly) and Merrick W. Creagh (Chief Yeoman). 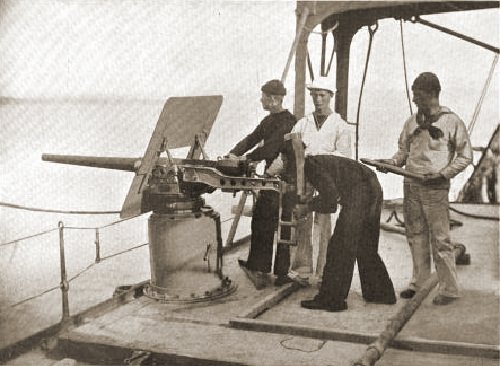 Gun practice on the Baltimore during the blockade of Manila Bay

With no ground troops to attack the city, Dewey blockaded the harbor. He also soon became aware of the dual risks of a Spanish relief expedition and intervention by another power.

He cabled Washington and asked for reinforcements. 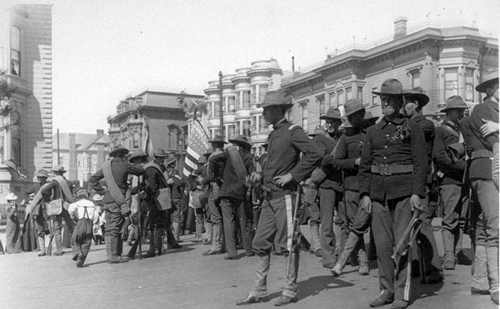 1st California Volunteer Infantry Regiment heading to the Presidio, May 7, 1898.

The US Army started to marshall a force at the Presidio, hat became the 8th Army Corps, dubbed the Philippine Expeditionary Force, under Maj. Gen. Wesley Merritt. 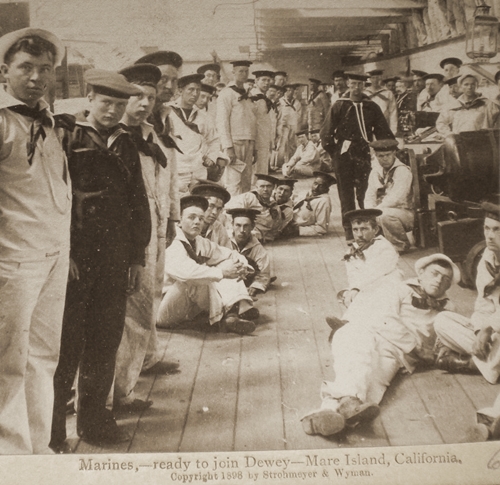 Rear Admiral George Dewey with staff and ship's officers, on board USS Olympia, 1898.

The few major warships left in the eastern Pacific were also ordered to reinforce Dewey. The cruiser Charleston accompanied the first Army expedition, bringing with her a much-needed ammunition resupply. To provide the Asiatic Squadron with heavy firepower, the monitors Monterey and Monadnock left California in June. These slow ships were nearly two months in passage. Monterey was ready in time to help with Manila's capture, while Monadnock arrived a few days after the Spanish surrender.

1st Colorado Volunteers parading down 17th Street in Denver, Colorado, enroute to San Francisco, California, the embarkation point for the Philippines. Photo was taken on May 15, 1898.

13th Minnesota Volunteers marching down Washington Avenue in Minneapolis, May 16, 1898. The following day, the Saint Paul Globe reported, "Mothers bade their sons go, husbands left wives and children, while lovers parted in sadness, but deep in the hearts of the Minnesota volunteers were the loyalty and patriotism which founded the nation and preserved it again in season of peril, an inspiration which will win battles anew and raise up many a brave hero, though others may, perhaps, find soldiers' graves in a far off land."