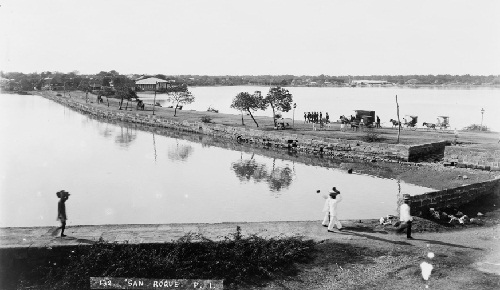 San Roque (ABOVE, in 1899) lies about 22 miles (35 km) southwest from Manila by road; a narrow artificial causeway about 600 yards (meters) in length  separates it from mainland Cavite Province. [LEFT, 1896 map].

It adjoins the Cavite navy yard that fell under American control after the battle of Manila Bay on May 1, 1898. (In 1903, the town of San Roque was merged into Cavite Nuevo, which, in turn became Cavite City; San Roque has been reduced to a district).

On the night of February 4, word reached the Americans at the yard  that the Filipinos had attacked US forces in Manila .

The call to arms was sounded. From across the bay the thunder of guns and the roll of volleys told that the conflict was on. The Americans  expected that the Filipinos would attack them from San Roque, but they did not. 51st Iowa Volunteers in the Philippines, 1899

Immediately thereafter sentries and outposts were established at the outskirts of San Roque by a battalion of the 51st Iowa Volunteer Infantry Regiment under the command of Col. John T. Loper. 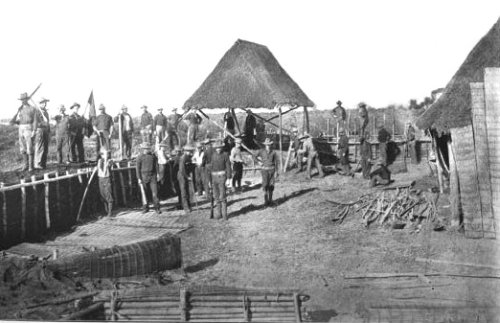 Batteries were placed opposite the approach from the causeway separating San Roque and Cavite Nuevo. Gatling guns were placed on bastions, and field pieces were trained on the blockhouses of the Filipinos, while the gunboats and were anchored close inshore in readiness to lend assistance to the Americans in case it was needed.

On the afternoon of February 8,  the Americans sent 2Lt. John A. Glass, of the 1st  Battalion of California Heavy Artillery (California National Guards), with a flag of truce and an escort to the Filipino commander, General Salvador Estrella (RIGHT), and presented him with Commodore George Deweys  demand that the Filipinos evacuate San Roque; unless the demand was complied with before nine o'clock of the following morning, the town would be bombarded.

On February 9, at 7;30 a.m., a party of three, headed by the Mayor of San Roque, came over the American line and asked for further time. Commodore Dewey, who was ashore, refused, and the delegation immediately returned. A white flag was then hoisted over a Filipino blockhouse, but it was a bluff, intended to draw the advance of American troops into a trap. Shortly thereafter the town was set ablaze by the Filipinos. 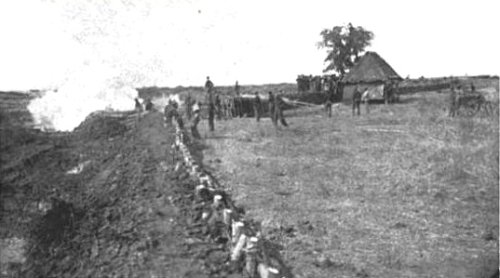 Two battalions of the 51st Iowa Volunteers, the Wyoming Light Battery and the Nevada Cavalry, with Batteries A and D of the California Heavy Artillery were dispatched across the causeway. Every passage through San Roque was a seething mass of flames, and in order to gain entrance to the town it was necessary for the Americans to flank it by moving along the seashore. The Americans fought their way through the flames of the burning town in pursuit of the retreating Filipinos, dragging their heavy guns by hand, and skirmishing whenever the opportunity afforded. Burr Ellis, of Frazier, Valley, California, narrated what he did in San Roque, Cavite. He wrote:

"They did not commence fighting over here for several days after the war commenced. Dewey gave them till nine oclock one day to surrender, and that night they all left but a few out to their trenches, and those that they left burned up the town, and when the town commenced burning, the troops were ordered in as far as possible and said,  'Kill all we could find.'  I ran off from the hospital and went ahead with the scouts. And you bet, I did not cross the ocean for the fun there was in it, so the first one I found, he was in a house, down on his knees fanning a fire, trying to burn the house, and I pulled my old Long Tom to my shoulder and left him to burn with the fire, which he did. I got his knife, and another jumped out of the window and ran, and I brought him to the ground like a jack-rabbit. I killed seven that I know of, and one more, I am almost sure of: I shot ten shots at him running and knocked him down, and that evening the boys out in front of our trenches now found one with his arm shot off at the shoulder and dead as h____. I had lots of fun that morning...." 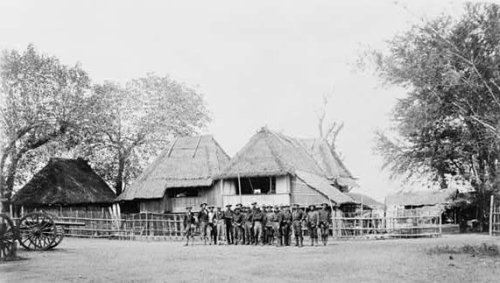 American troops in possession of Teatro Caviteño in Cavite Nuevo (now Cavite City). The theater was Emilio Aguinaldo's first military headquarters upon his return from Hong Kong on May 19, 1898. It was here that the Philippine national flag was hoisted for the first time on May 28, 1898 after the Filipinos defeated the Spaniards in the battle of Alapan, Imus, Cavite. The town of San Roque was merged into Cavite Nuevo in 1903.