On , with his conventional forces shattered, Emilio Aguinaldo ordered a shift to guerilla warfare. Since then, the Americans found it frustrating to crush an enemy who appeared from nowhere, struck at will and slinked back into the shadows. They concluded that the resistance would never be broken until Aquinaldo was killed or captured. However, they did not know his whereabouts

French journal features the capture of Aguinaldo in its issue of April 14, 1901.  The "Le Petit Journal / Parisien" was a leading illustrated news journal published in France from 1891 until WWII. It was famous for its brightly colored prints graphically depicting news events around the world as well as happenings in France. 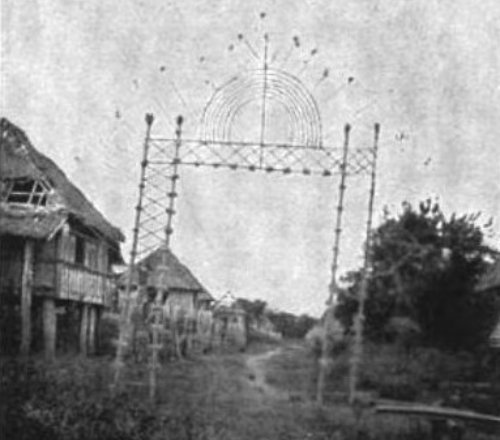 A decoration for President Emilio Aguinaldo on his 32nd birthday on March 22, the day before his capture. The remote village was in gala dress, with arches and such other decorations that were provided. The day was celebrated with horse races, dancing, serenades, and amateur theatricals. PHOTO taken at Palanan, March 24, 1901. 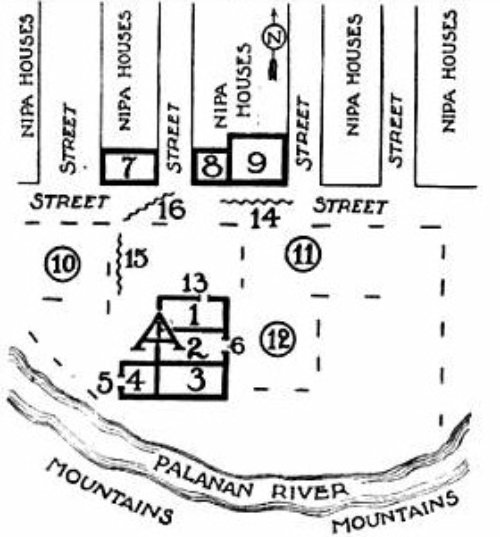 On March 23, the men in disguise reached Palanan,

"Tal Placido...told us that we were the prisoners of the Americans, who, he said, were on the other side of the river with four hundred American soldiers, and would soon be here...several of Tal Placido's soldiers came into the house...and surrounded Barcelona and myself. A little later five Americans...came into the room where we were...one of them asked, 'Which one of you is Aguinaldo?' As soon as I had been identified by the Americans I was placed, with Dr. Barcelona and Colonel Villa, in one of the rooms of the house...We were then informed that our captors were General Funston, Captains Newton and Hazzard, and Lieutenants Hazzard and Mitchell..." 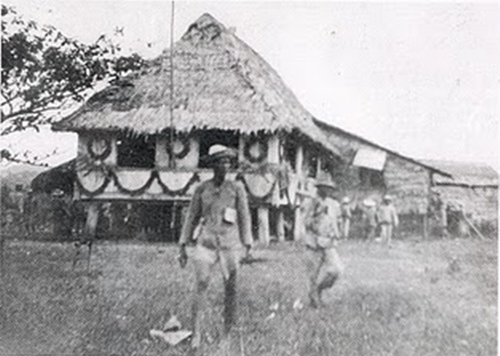 Macabebe Scouts patrol in front of Aguinaldo's headquarters at Palanan. 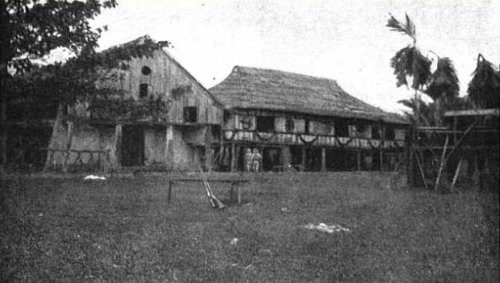 The quarters of Aguinaldo's guard, taken from the window of his house a few moments after the capture. The two white objects are men of his guard who were killed. PHOTO taken on March 23, 1901. 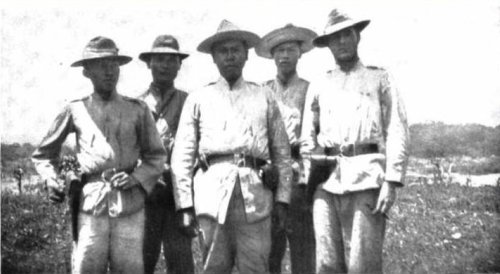 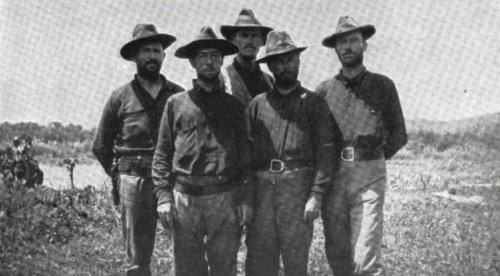 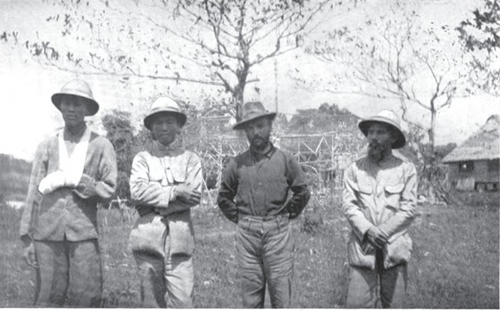 March 25, 1901:  Aguinaldo and his aides are being prepared for loading onto the USS Vicksburg. PHOTO was taken near the beach at Palanan Bay.

On the morning of , Aguinaldo and three of his men were marched six miles (10 km) to the seashore at Palanan Bay, arriving there at noon. The Americans made two signal fires and hoisted a white flag. A little later, a steamer rose on the horizon. Within two hours the warship USS Vicksburg was anchored near the beach. President and General Emilio F. Aguinaldo boarding the USS Vicksburg as a POW

By five o'clock in the afternoon, the prisoners and their captors were all on board, the anchor was hoisted, and the ship made for the open sea bound for Manila. 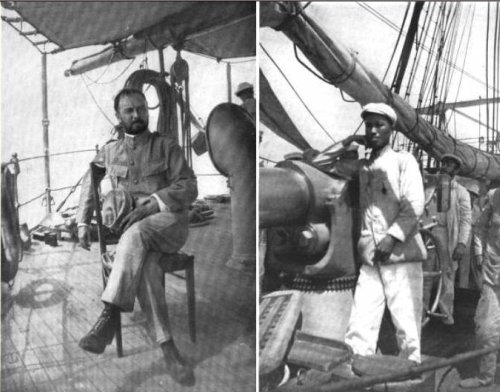 Brig. Gen. Frederick Funston and President Emilio Aguinaldo on the USS Vicksburg, on the way to Manila. 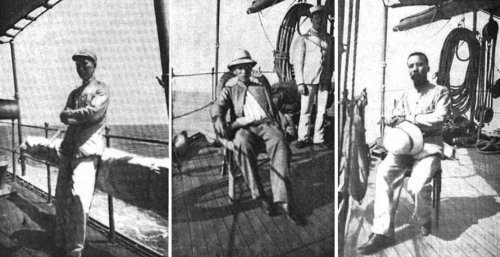 Aguinaldo (LEFT), Col. Simeon Villa (CENTER) and Dr. Santiago Barcelona (RIGHT) on the USS Vicksburg. Funston wrote:  "The prisoners were treated with the greatest courtesy, being entertained in the officers' messes, and sitting about on deck whenever they desired." Aguinaldo on board the USS Vicksburg on the way to Manila

During the trip, Aguinaldo admitted to Funston that he had been completely fooled by the phony dispatches. He later confided that he could "hardly believe myself to be a prisoner"  and that he was gripped by a "feeling of disgust and despair for I had failed my people and my motherland."

At 2:00 a.m. of  March 28, the USS Vicksburg anchored in Manila Bay, with all lights screened, to keep the return of the expedition secret.

The Vicksburg launch, with Aguinaldo and his aides on board, steaming for the mouth of the Pasig River, at daybreak, March 28, 1901.

At 6:00 a.m., General Funston and Aguinaldo, accompanied by some officers, boarded one of the launches and left the USS Vicksburg.

They went up the Pasig River to the residence of the Governor-General in Malacañan, where they disembarked. Aguinaldo was presented to Brig. Gen. Arthur C. MacArthur, Jr. as a prisoner of war. He was treated by the Americans more as a guest than as 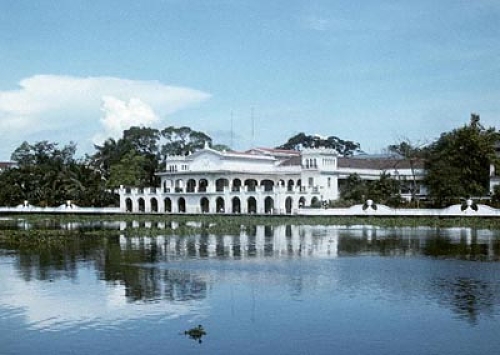 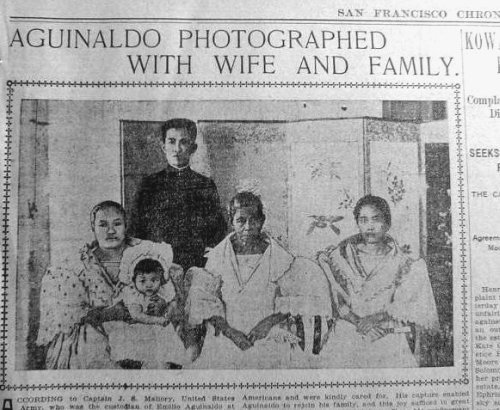 At breakfast, MacArthur promised Aguinaldo that he would immediately send for his family, whom he had not seen for a long time.

Aguinaldo complimented his captors: "At all times since our capture, as well in Palanan as on board the Vicksburg, we have been treated with the highest consideration by our captors, as well as by all the other American officers with whom we have come in contact."

Nine days after his capture, on April 1, Aguinaldo swore allegiance to the United States. 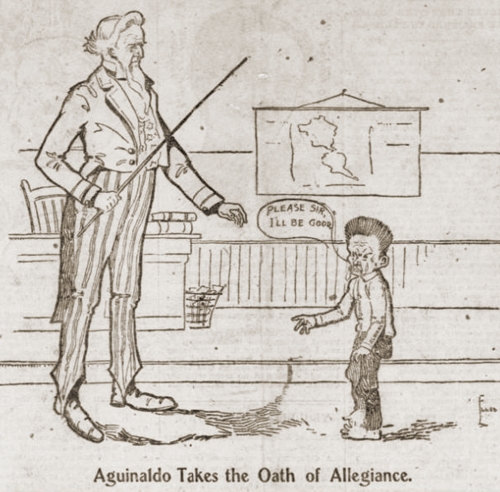 Photo published in the New-York Daily Tribune, issue of June 23, 1901

The Macabebes were fierce freedom fighters when they first appeared in written history; they  fought the Spanish invaders in 1571.  Ironically, it was the Tagalogs (under Lakandula of Tondo and Rajah Soliman of Manila) who eventually welcomed the Spaniards while the Kapampangans (under Tarik Soliman of Macabebe) had to die fighting in the Battle of Bangkusay.

Without the Macabebes, the Philippines would have been colonized by the Dutch and later by the British, two Protestant nations.  This is the reason the feast of the La Naval is celebrated only in two places, Manila and Pampanga. When the Revolution broke out, the Macabebes sided with the Spaniards even while the rest of Pampanga threw its support for the quest for independence.  On June 26, 1898 representatives from all Pampanga towns, except Macabebe, gathered in San Fernando and swore allegiance to Gen. Maximino Hizon (LEFT, image from www.nhi.gov.ph) who was the provincial military governor and representative of General Emilio Aguinaldo. Macabebes in the Spanish military were called "Voluntarios de Macabebe". Macabebes protected the retreating Spaniards, rescuing friars and the families of the Spanish Army. The Spaniards promised to return and resettle the Macabebes to the Caroline Islands should the revolution succeed.

In retaliation, Antonio Luna's troops burned the town of Macabebe and executed a large number of its residents (hundreds, according to one unverified account).  When the Americans bought and colonized the Philippines, Macabebes enlisted in the US Army by the hundreds.  These events fueled the enmity between Kapampangans and Tagalogs, climaxing in the sensational capture of the Tagalog general, Emilio Aguinaldo, President of the Republic of the Philippines.   The US President and US Congress, jubilant over Aguinaldo's capture, authorized the formal inclusion of the Macabebes into the Philippine Scouts, a special unit of the US Army. In 1901 scarcely an American alive was unfamiliar with the story of the "hero of the Philippine insurrection". [LEFT, Harper's Weekly, April 6, 1901]

But Funston soon fell under criticism for his methods used to capture Aguinaldo. An editorial in the Boston Post  made the following comments:

"When the capture of Aguinaldo by Funston was announced by cable, it was hailed as a great exploit... But, as the details have come to light, contempt and disgust have taken the place of admiration. The American people accepted, though not without some qualms of conscience, the forgery, treachery and disguise with which Funston prepared his expedition.

In 1902, Funston toured the United States to increase public support of the Philippine-American War. He became the focus of controversy  by bellicosely promoting total war, enthusiastically endorsing torture and condoning civilian massacres.

In Chicago, he stated, in reaction to the courts-martial of Brig. Gen. Jacob H. Smith and Maj. Littleton Waller for atrocities committed in Samar:

"I personally strung up thirty-five Filipinos without trial, so what was all the fuss over Waller's 'dispatching' a few 'treacherous savages'? If there had been more Smiths and Wallers, the war would have been over long ago. Impromptu domestic hanging might also hasten the end of the war. For starters, all Americans who had recently petitioned Congress to sue for peace in the Philippines should be dragged out of their homes and lynched." 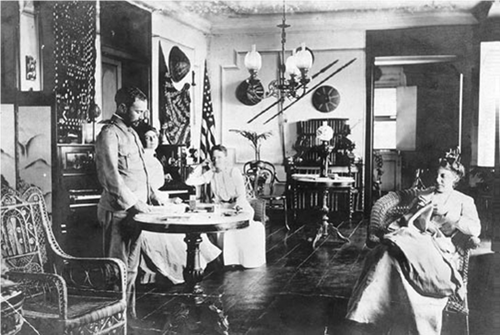 In San Francisco, he suggested that the editor of a noted anti-imperialist paper "ought to be strung up to the nearest lamppost." At a banquet in the city he called Filipinos "unruly savages" and claimed he had personally killed fifty prisoners without trial.

Captain Edmond Boltwood, an officer under Funston, confirmed that the general had personally administered the water cure to captives, and had told his troops "to take no prisoners."

Frederick Funston was born on in New Carlisle, Ohio. He graduated from High School in 1886 and entered the , but left college without earning a degree. In 1896, he enlisted in the Cuban Revolutionary Army and was made a captain of artillery. Before he became sick with malaria in 1898 and returned home he had risen to the rank of lieutenant colonel. When the Spanish-American war broke out, Funston was appointed a Colonel of the 20th Kansas Volunteer Infantry Regiment. On , he was having dinner with friends at the in , close to his headquarters at Fort Sam Houston. He had just finished dinner and was listening to the hotel orchestra play when a moment later he was dead. A heart attack took his life; he was 51-years-old. The people of showed their respect by opening their most sacred shrine, the , so that he could lie in state there. He was the first person ever so honored. His body was then taken to the San Francisco City Hall Rotunda, where he laid in state for two days.

He was laid to rest at the Presidio () in full dress uniform on a hill overlooking the city.

A San Francisco park was named after General Funston.

Had he not died in early 1917, President Woodrow Wilson would have picked him, not General John J. "Black Jack" Pershing, to command the American forces in World War I. Entrance to Malacañan Palace in San Miguel District, Manila. Photo was taken in 1900 or 1901 Aguinaldo at Malacañan Palace with an American visitor, Annie Mitchell, a few days after his arrival in Manila. Emilio Aguinaldo, Colonel Simeon Villa, Chief of Staff, and Dr. Santiago Barcelona on the balcony overlooking the Pasig River at Malacañan. PHOTO was taken on Dec. 4, 1901. 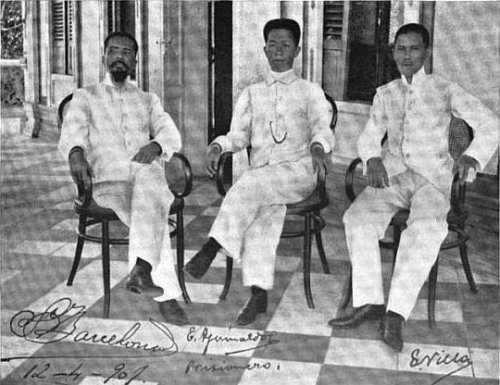