In the run up to the Spanish-American War, several American Consuls - in and - sought Emilio Aguinaldo's support. None of them spoke Tagalog, Aguinaldo's own language, and Aguinaldo himself spoke poor Spanish. A British businessman who spoke Tagalog, Howard W. Bray, agreed to act as interpreter. Aguinaldo and Bray maintained later that the had been promised independence in return for helping the defeat the Spanish. Some of the Filipino exiles and Spanish officers in charge of their deportation to Hong Kong. Emilio Aguinaldo is the central figure in the second row; to his right is Lt. Col. Miguel Primo de Rivera, nephew of the Spanish Governor-General. PHOTO was taken in Hong Kong in early 1898.

Hong Kong:  Some of the exiles at a park with British acquaintances.  Photo taken in 1898.

In Hong Kong, Aguinaldo was told by U.S. consul Rounsenville Wildman that Dewey wanted him to return to the Philippines to resume the Filipino resistance.

Arriving in Manila with thirteen of his staff on May 19  aboard the American revenue cutter McCulloch, Aguinaldo reassumed command of Filipino rebel forces. Although he and Dewey spoke, no one knows the  substance of the discussions Dewey only spoke Spanish, Aguinaldo spoke it poorly and there was no intermediary.

[Years later, Aguinaldo recalled a meeting with Dewey: "I asked whether it was true that he had sent all the telegrams to the Consul at , Mr. Pratt, which that gentleman had told me he received in regard to myself. The Admiral replied in the affirmative, adding that the had come to the to protect the natives and free them from the yoke of . He said, moreover, that America is exceedingly well off as regards territory, revenue, and resources and therefore needs no colonies, assuring me finally that there was no occasion for me to entertain any doubts whatever about the recognition of the Independence of the Philippines by the United States."]

[Aguinaldo, in his book, "A Second Look At America," admitted he naively believed that Dewey "acted in good faith" on behalf of the Filipinos.] Cavite Province:  A medic attends to a wounded Filipino soldier. Photo taken in May or June 1898. Cavite Province:  The same wounded Filipino soldier shown in preceding photo is loaded onto a cart.  Photo taken in May or June 1898.

Five days after his arrival, on May 24, Aguinaldo temporarily established a dictatorial government, but plans were afoot to proclaim the independence of the country. A democratic government would then be set up.

By early June, with no arms supplied by Dewey, Aguinaldo's forces  had overwhelmed  Spanish garrisons in Cavite and around Manila, surrounded the capital with 14 miles of trenches, captured the Manila waterworks and shut off access or escape by the Pasig River. Links were established with other movements throughout the country.

With the exception of Muslim areas on Mindanao and nearby islands, the Filipinos had taken  effective control of the rest of the .

Aguinaldo's 12,000 troops kept the Spanish soldiers bottled up inside Manila until American troop reinforcements could arrive. Aguinaldo was concerned, however, that the Americans would not commit to paper a statement of support for Philippine independence.

[John Foreman, American historian of the early Philippine-American War period stated that, "Aguinaldo and his inexperienced followers were so completely carried away by the humanitarian avowels of the greatest republic the world had seen that they willingly consented to cooperate with the Americans on mere verbal promises, instead of a written agreement which could be held binding on the U.S. Government."] Assembly room (LEFT) and library (RIGHT) of the private Universidad de Santo Tomas, at Intramuros district, Manila, in 1887. It was founded on April 28, 1611 by Dominican friars and until 1927 did not accept women (The same year that it moved to Sampaloc district). During the Spanish era, only affluent native Filipinos could afford to send their sons to the school. Now known as the University of Santo Tomas (UST), it has the oldest extant university charter in the Philippines. The UST produced four Philippine presidents and many revolutionary heroes, including Jose Rizal, the national hero.

The Colegio de San Juan de Letran in Intramuros district, Manila, and students, in 1887.  The private Roman Catholic institution, founded in 1620, was and still is, owned by priests of the Dominican Order. It catered to the sons of wealthy native Filipinos and did  not accept women until the 1970's. It produced four Philippine presidents and many  revolutionary heroes; it is the only Philippine school that has graduated a Catholic Saint that actually lived and studied inside its original campus (Vietnamese Saint Vicente Liem de la Paz).  Letran is the only Spanish-era school that still stands on its original site in Intramuros. Scenes at the secondary school Ateneo Municipal de Manila, Intramuros district, Manila, in 1887.  Now known as the Ateneo de Manila University, a private coed institution run by the Jesuits, it began on Oct. 1, 1859 when the latter took over the Escuela Municipal, then a small private primary school maintained for the children of Spanish residents. In 1865, it became the Ateneo Municipal de Manila when it converted to a secondary school for boys, and began admitting native Filipinos who invariably came from well-to-do families. The Ateneo attained college status in 1908. It moved to Ermita district, Manila, in 1932.  The campus was devastated in 1945 during World War II. In 1952, most of the Ateneo units relocated to Loyola Heights, Quezon City. It became a university in 1959. It admitted women for the first time in 1973. The Ateneo produced many revolutionary heroes, including the national hero, Jose Rizal. Chinese merchants in Manila.  Photos taken in the late 1890's

Chinese merchants:  a chocolate-maker (LEFT) and a textile fabric manufacturer (RIGHT).  Photos taken at Manila in the late 1890's. Flipino fighters and some American soldiers.   Photo taken in 1898. June 3, 1898: Spanish battery of two 8-centimeter caliber guns firing at Filipinos at the Zapote River bridge, Cavite Province. The Spaniards kept up a continuous fire with their field guns and Mauser rifles before charging the bridge. June 3, 1898: Spanish soldiers on Zapote Bridge. It was a temporary occupation; the Filipinos, numbering about 500, counterattacked and sent the Spanish force of 3,500 reeling back. 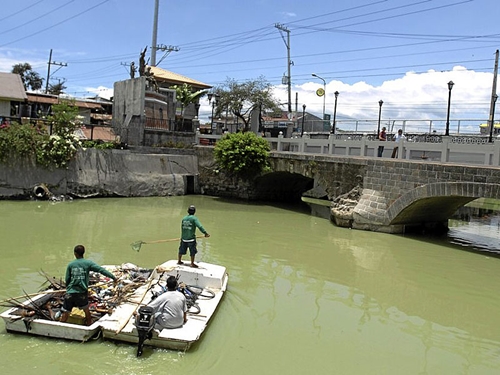 Filipino soldiers assemble in front of the San Nicolas de Tolentino Chapel in Parañaque, a few miles south of Manila. The Filipino army converted the chapel (built in 1776) into a storehouse and magazine. PHOTO was taken in 1898. Spanish soldiers and Filipinos in Spanish army with two Filipino POWs at Malabon, 1898. While awaiting the arrival of ground troops, Dewey welcomed aboard his flagship USS Olympia members of the media who clamored for interviews. Numerous vessels of other foreign nations, most conspicuously those of , , , and arrived almost daily in Manila Bay. These came under the pretext of guarding the safety of their own citizens in , but their crews kept a watchful eye on the methods and activities of the American Naval commander. In recognition of George Dewey's leadership during the Battle of Manila Bay, a special medal known as the Dewey Medal was presented to the officers and sailors under Commodore Dewey's command. Dewey was later honored with promotion to the special rank of  Admiral of the Navy; a rank that no one has held before or since in the US Navy.

Years later in Senate hearings, Admiral Dewey testified, "I never treated him (Aguinaldo) as an ally, except to assist me in my operations against the Spaniards."

Dewey was born on in . He graduated from the US Naval Academy at on . During the American Civil War he served with Admiral David Farragut during the Battle of New Orleans and as part of the Atlantic blockade.

He was commissioned as a Commodore on  .

On  Nov. 30, 1897 he was named commander of the Asiatic Squadron, thanks to the help of strong political allies, including Assistant Secretary of the Navy, Theodore Roosevelt.

He held the rank of Admiral of the Navy until his death in , on  . Aguinaldo was the first and youngest President of the . He was born on in Cavite El Viejo (now Kawit), province. He was slender and stood at five feet and three inches. He studied at the Colegio de San Juan de Letran. He quit his studies at age 17 when his father died so that he could take care of the family farm and engage in business.

On March 14, 1896, he joined the Katipunan and for his name in the secret revolutionary society, he chose Magdalo, after the patron saint of Cavite El Viejo, Mary Magdalene. He was initiated in the house of Katipunan Supremo Andres Bonifacio on Cervantes St. (now Rizal Ave.), .

When the revolution against Spain broke out on Aug. 30, 1896, he was the capitan municipal (mayor) of Cavite el Viejo.

He assumed total control of the Filipino revolutionary forces after executing Andres Bonifacio on .

He was captured by the Americans led by Brig. Gen. Frederick Funston on March 23, 1901 in remote Palanan, Isabela Province. On April 1, 1901, he pledged allegiance to the United States. (His son, Emilio Jr., graduated from West Point in 1927, in the same class as Gen. Funston's son.)

On , his first wife, Hilaria, died.

On , less than a year after the death of his second wife, Aguinaldo died of coronary thrombosis, at the age of 95, at the in .

His remains are buried at the  in ,