Maj. Gen. Henry W. Lawton was the highest-ranking military officer to be killed in action in the Philippine-American War. He was the only general awarded the Medal of Honor during the American Civil War to die in combat and the first serving general killed outside of North America.

When the Spanish American War broke out in 1898, Lawton was sent to Cuba in command of the 2nd division of the 5th Army Corps, distinguishing himself in El Caney and backed up Teddy Roosevelt and his Rough Riders in their charge on San Juan Hill.

However, he was tormented by chronic depression and alcoholism. After smashing the interior of a saloon and personally assaulting the local police chief, Lawton quietly returned home. The government fabricated a cover story of tropical illness. His career potentially in ruins, he begged President McKinley for a second chance. General Lawton at his office in Manila.

General Lawton's residence along the Pasig River in Manila. Photo was taken from the Puente de Ayala ("Ayala Bridge"), 1899. Lawton captured Santa Cruz, Laguna Province and San Isidro, Nueva Ecija Province during his first three months. On June 10, 1899, he began his Cavite campaign which pushed the Filipino line far back from Manila on the south. In October 1899 a successful campaign against the main force of Aguinaldo began. Lawton's position is marked by a star On Dec. 19, 1899,  he faced the men of Gen. Licerio Geronimo at San Mateo, Morong Province. Lawton's force consisted of  Troop I of the Fourth Cavalry,  2nd and 3rd Squadrons of the Eleventh Cavalry U.S.V., and one battalion each of the 27th Infantry Regiment U.S.V. and 29th Regular  Infantry Regiment.

believed in leading from the front, continuing a style he had employed since his years in the Civil War. His subordinates were constantly worried that he needlessly exposed himself to hostile gunfire, but refused to observe from the rear, or to take cover.

At about 9:15 am, General Lawton was walking along the firing line within 300 yards of a small Filipino trench, conspicuous in the big white helmet he always wore and a light yellow raincoat. He was also easily distinguishable because of his commanding 6'3" stature.

The Filipinos directed several close shots which clipped the grass nearby. His staff officer called General Lawton's attention to the danger he was in,  but he only laughed.

Place near San Mateo where General Lawton was killed

Suddenly Lawton exclaimed:
"I am shot!" and fell dead into the arms of a staff officer. Bonifacio Mariano Street (shortened to "B. Mariano St.") in San Mateo, Rizal Province, named in honor of the Filipino who fired the shot that killed General Lawton.   (Photo courtesy of Macky Hosalla).

Bonifacio Mariano was credited with the kill. A street in San Mateo was named in his honor.

At 11:00 am, the Americans successfully crossed the river and drove the Filipinos from San Mateo. Thirteen  Americans were wounded; the US Army reported 40 Filipinos killed and 125 wounded. Before his death, Lawton had written about the Filipinos in a formal correspondence, "Taking into account the disadvantages they have to fight against in terms of arms, equipment and military discipline, without artillery, short of ammunition, powder inferior, shells reloaded until they are defective, they are the bravest men I have ever seen..." 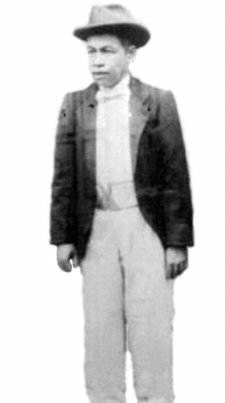 Gerónimo was born to Graciano Geronimo and Flaviana Imaya in Sampáloc district, Manila on Aug. 27, 1855. (LEFT, Geronimo in 1904, pic courtesy of David Banaghan).

His father hailed from Montalban, Morong Province (now Rodriguez, Rizal Province) and his mother was a native of Gapan, Nueva Ecija Province.

When he was nine, he lived with his grandfather in a farm in San Miguel de Mayumo, Bulacan Province. At 14, he joined his father in Montalban where he helped in farm chores. Due to poverty, Geronimo did not enjoy the benefits of formal education. But he learned how to read and write with the help of a friend who taught him the alphabet.

He married twice; his first marriage to Francisca Reyes ended with her death. His second wife was Cayetana Lincaoco of San Mateo, who bore him five children. He earned a living by farming, and by working as a boatman on the Marikina and Pasig rivers,  transporting passengers to and from Manila.

Geronimo was recruited into the secret revolutionary society Katipunan by his godfather, Felix Umali, alguacil mayor of barrio Wawa, Montalban. Geronimo was part of the rebel group that assaulted the El Deposito (water reservoir) and Polvorin (gunpowder depot) in San Juan del Monte on Aug. 30, 1896. He organized Katipunan forces under his command in the towns of Montalban, San Mateo, and Marikina, all in Morong Province. His forces first served under General Francisco Makabulos in San Rafael, Bulacan and later under General Mariano Llanera during military operations against the Spaniards in San Miguel de Mayumo, Bulacan, and Cabanatuan, Nueva Ecija. Geronimo's base of operations was Mt. Puray in Montalban. Here an assembly was held in June 1897 for the purpose of appointing generals into the various military divisions into which the country was divided. The assembly was presided over by General Emilio Aguinaldo. A Departmental Government of Central Luzon was created and Geronimo was designated division general of the revolutionary army in Morong. [LEFT, Geronimo, probably in the 1910's].

When the Truce of Biyak-na-Bato of Dec. 14, 1897 temporarily brought peace, he retired to his farm in Montalban. After the Americans smashed the Spanish fleet in Manila Bay on May 1, 1898, he allowed the Spaniards to assign him as a commandant in the Milicia Territorial, formed to resist the Americans on land.

On May 19, 1898, Aguinaldo returned from exile in Hongkong and resumed the war against Spain. Geronimo deserted the colonial Milicia and rejoined his revolutionary comrades. On Nov. 28, 1898, he returned to his post as division general of the Philippine army in Morong.

When the Filipino-American War broke out on Feb. 4, 1899, he was appointed by Gen.  Antonio Luna as the commanding general of the third military zone of Manila (comprised of Mariquina, San Mateo, Montalban, Novaliches, and other areas northeast of Manila);   on July 12, 1900, he was appointed by Gen. Mariano Trias as commander of the fused second and third zones of Manila, and a month later, Morong and Marinduque provinces as well. (The second zone covered Pasig and other areas south and southeast of Manila).

Arturo Dancel (RIGHT, in 1903), a member of the pro-American Partido Federal, convinced Geronimo to surrender; on March 30, 1901 he gave up in San Mateo with 12 officers, 29 men and 30 guns. He initially surrendered to Capt. Duncan Henderson, CO of Company E, 42nd Infantry Regiment of U.S. Volunteers, who presented him to Col. J. Milton Thompson, the regimental commander. Shortly afterward, Geronimo joined the Partido Federal. Geronimo became one of a handful of Filipinos admitted into the officer ranks of the colonial Philippine Constabulary (PC). He enlisted on June 1, 1902. As a PC Inspector, he successfully brought in former Filipino soldiers roaming the countryside. He was also part of the search party that brought down and killed General Luciano San Miguel on March 27, 1903.

He left the constabulary on May 16, 1904 and returned to work his farm in Barrio San Rafael, Montalban.

Geronimo (LEFT, in his 60's, pic courtesy of Macky Hosalla) died on Jan. 16, 1924. He was 68 years old.  Barangay Geronimo, Geronimo Park and General Licerio Gerónimo Memorial National High School in Rodriguez, Rizal, as well as a street in Sampáloc, Manila, were named in his honor.