When the Philippine-American War broke out on Feb. 4, 1899, General Manuel Tinio, military governor of the Ilocos provinces and commanding general of all Filipino forces in Northern Luzon, had 1,904 men (the "Tinio Brigade" ), consisting of 68 officers, 1,106 riflemen, 200 sandatahanes or bolomen, 284 armorers, 37 medics, 22 telegraphers, 80 cavalrymen, 105 artillerymen and 2 Spanish engineers. He distributed them along the more than 270-kilometer coast from Tagudin, Ilocos Sur Province to Bangui, Ilocos Norte Province.

By April 1899, Tinio (RIGHT) had built 640 defensive trenches from La Union Province to Ilocos Norte Province. They were designed by Gen. Jose "Pepe" Alejandrino, a Belgian-educated engineer from Pampanga Province.

Two American reporters, Sargent and Wilcox, described the coastal trenches in Cabugao, Ilocos Sur Province:  "On the shore at Salomague, there is a fortification about five feet high and one hundred fifty feet long. This barricade is built of sticks arranged in two rows and filled in between with sand and coral stones. Its walls are about four feet thick, and it is built in the form of a crescent with the concave part toward the sea..."

A company of the Tinio Brigade drilling on Plaza Salcedo, Vigan, Ilocos Sur Province.   General Antonio Luna praised the Brigade, noting that it was the most disciplined unit in the Philippine Army.   It took the Americans 7,000 troops, 1 and a ½ years, and 2 generals to subdue the Brigada Tinio. In November 1899, General Tinio, who was based in Vigan, Ilocos Sur Province, was ordered to go down south to Pangasinan Province to block the Americans pursuing Aguinaldo and his party who were retreating northward. His deputy, Gen. Benito Natividad, stayed on as post commander in Vigan with a few officers and 50 riflemen. After losing to the Americans at San Jacinto (November 11) and Pozorrubio (November 15), General Tinio withdrew to La Union Province to continue protecting Aguinaldo's retreat. He engaged and delayed the Americans in Rosario, Sto. Tomas , and Aringay.  This gave  Aguinaldo's retreating party enough time to reach Candon, Ilocos Sur Province, on November 21, from where Aguinaldo decided to move east to the mountains in the interior.

On November 23, Aguinaldo reached the highland town of Angaki (now Quirino), Ilocos Sur Province, and stayed there until the end of the month. 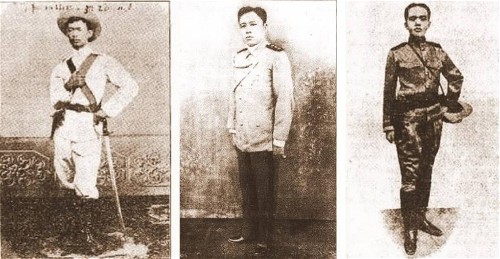 Vigan, Ilocos Sur Province. Established in the 16th century, Vigan has preserved much of its Spanish colonial heritage. On Dec. 2, 1999, the historic city  was inscribed in the UNESCO World Heritage List of Sites and Monuments. Vigan represents a unique fusion of Asian building design and construction with European colonial architecture and planning. It is an exceptionally intact and well preserved example of a European trading town in East and South-East Asia.

The Americans proceeded to occupy the adjacent town of Vigan, the provincial capital. The post commander, Gen. Benito Natividad, and his men, had evacuated the town at the onset of the shelling of Caoayan.

Vigan, Ilocos Sur Province.  Photos were taken in late 1899 or early 1900 by a soldier of the 33rd US Infantry Regiment. The Palacio de Arzobispado de Nueva Segovia, Vigan, Ilocos Sur Province. It served as headquarters of Gen. Manuel Tinio then of the  Americans under Lt. Col. James Parker. PHOTO was taken in late 1899 or early 1900 by a soldier of the 33rd US Infantry. The Palacio de Arzobispado de Nueva Segovia as it looked in 2006.   The only surviving 18th Century archbishops residence in the country, its Museo Nueva Segovia showcases antique portraits of bishops, a throne room, archdiocesan archives, and other artifacts gathered from various colonial churches all over Ilocos Sur Province.

Brig. Gen. Samuel BM Young, who was chasing Aguinaldo and Tinio relentlessly; reached Candon on November 28. He learned that Aguinaldo was at Angaki, 25 kms. away to the southeast, while Tinio was up north some 40 kms. away. Young realized immediately that General Tinios purpose in taking his forces to the north was to lead the Americans away from following Aguinaldo. Forthwith, he sent Lt. Col. Robert Howzes battalion to Concepcion, Ilocos Sur Province, to resume the pursuit of Aguinaldo, while the bigger part of his force marched towards  the north in an attempt to destroy the Tinio Brigade, the last remaining army of the Republic. Vigan Cathedral, officially St. Paul Metropolitan Cathedral. Located next to the Palacio de Arzobispado de Nueva Segovia, the cornerstone of the cathedral was laid on Jan. 31, 1790 and construction was completed four years later. 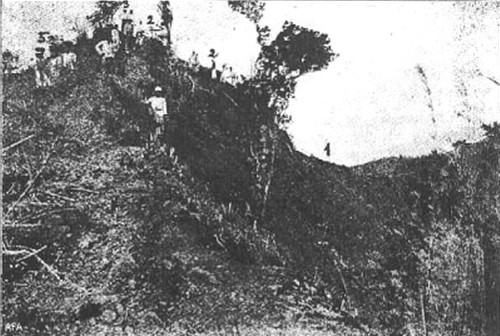 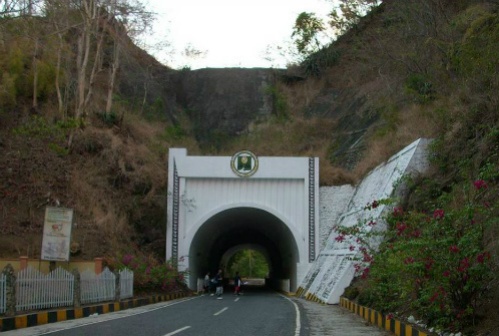 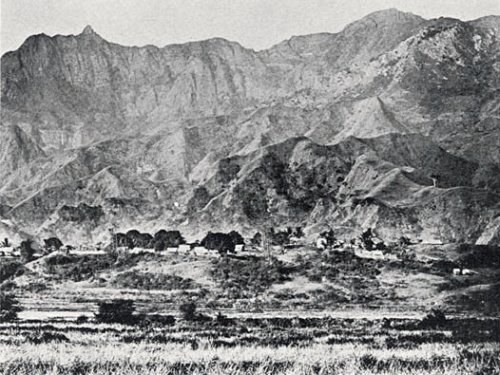 Not too far south of Tinio was Tirad Pass, Concepcion, where  General Gregorio del Pilar was killed a few days later on December 2 while trying to block the American pursuit of Aguinaldo.

On November 30, Aguinaldo and his party left Angaki for Cervantes, Ilocos Sur Province. As the latter offered good conditions for defense and an abundance of food, Aguinaldo planned to stay there for a long time and defend himself.

On December 2, on the same day that Del Pilar died at Tirad Pass, Aguinaldo fled from  Cervantes. He and his entourage endured the long, difficult trek over the Cordillera mountain range, until they  descended on the Cagayan Valley on May 28,1900. Aguinaldo finally established himself at Palanan, Isabela Province, on September 6, 1900. On December 4, at 2:00 a.m., Tinio's men, estimated to number 800,  sneaked into Vigan under cover of darkness and attacked Company B, 33rd Infantry Regiment of US Volunteers (USV), which consisted of 153 soldiers. Severe street fighting ensued and continued for four hours until the Filipinos were driven out.

The Annual Reports of the United States War Department 1903, in its summary of major engagements in the Philippines, listed 8 Americans killed and 3 wounded, and 100 Filipinos killed at Vigan. A separate report added that 32 Filipinos and 84 rifles were captured. The hospital at Vigan. The 33rd US Infantry charged the Filipinos fighting from behind its rock wall and balustrade. PHOTO was taken in late 1899. American soldiers on horseback pause in front of the hospital at Vigan. PHOTO was taken in late 1899. General Young (RIGHT) ordered a general assault upon Tangadan Pass in the afternoon of the same day of the Vigan attack. Companies F, G and H of the 34th Infantry Regiment, USV, engaged the Filipinos for 3 hours. In the dark of night, they were able to climb an adjacent hill without being noticed. Realizing that their position had now become indefensible, the Filipinos withdrew, leaving 35 dead. Thirteen Americans were wounded. The following day, December 5, the Americans attacked San Quintin and Bangued in succession. Tinio withdrew to Dingras, Ilocos Norte Province then proceeded to Solsona, Ilocos Norte Province. He spent the next couple of months in the mountains of Solsona, where he began fortifying the peak of Mt. Bimmauya, northwest of Cabugao, Ilocos Sur Province.

The Americans at Vigan were soon reinforced by 160 men shipped from San Fabian, Pangasinan Province. In the middle of the night on December 20, Celedonio sneaked back into Cabugao with a commando unit, abducted and bayoneted to death Presidente Municipal Basilio Noriega and his son-in-law, Benigno Sison y Suller, an innocent bystander. Noriega had been falsely accused as being a pro-American sajonista (Saxonist or pro-Anglo-Saxon). He was in fact condemned without trial by tiktiks (informers) who held personal grudges against him. His son-in-law unfortunately happened to be there and was a witness to the kaut (abduction).

Their bodies were found the following morning in the wooded area north of the church, each marked on the forehead "traidor de la patria" (traitor to the country). Ironically, Benigno's family of Sisons and Sullers and their Azcueta-Serrano wives and in-laws were the wealthiest and biggest contributors to the revolutionary movement in Cabugao. Gregorio Del Pilar ( PHOTO, ABOVE) was born in San Jose, Bulacan, on Nov 14, 1875 to an illustrious ilustrado (middle class) family. In his early years, he aided his uncle, Marcelo H. del Pilar, in distributing his anti-friar writings. He was a member of the revolutionary forces in Bulacan even when he was studying at the Ateneo de Municipal. When the revolution broke out on Aug 30, 1896, he joined the forces of Heneral Dimabunggo (Eusebio Roque). In the battle at Kakarong de Sili, Pandi, Bulacan, on Jan 1, 1897, he almost lost his life. Toward the latter part of May 1899, with the Philippine army reeling in the face of unrelenting American offensives, President Emilio Aguinaldo created a peace commission to negotiate an armistice. He appointed Del Pilar to head the Filipino panel.

For two days, on May 22 and 23, the Filipinos conferred with the Schurman Commission. The talks failed, owing to the Americans' insistence that US sovereignty was non-negotiable. In addition, the Filipino army had to surrender unconditionally.  [RIGHT, photo of General Del Pilar taken on May 22-23, 1899 in Manila]. 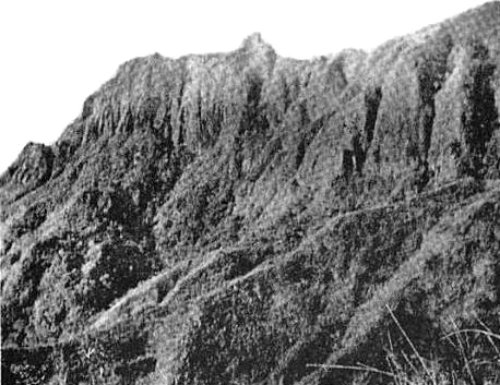 and stone barricades, all of which dominated the narrow trail that zigzagged up towards the pass.

On Dec. 2, 1899, Major Peyton Conway March (LEFT, as First Lt. in 1896-1898) led 300 soldiers of the 33rd Infantry Regiment of  U.S. Volunteers, up the pass. A Tingguian Igorot, Januario Galut, led the Americans up a trail by which they could emerge to the rear of the Filipinos. Del Pilar died in the battle, along with 52 subordinates.  The Americans lost 2 men killed.

The Americans looted the corpse of the fallen general. They got his pistol, diary and personal papers, boots and silver Del Pilar's body was left by the roadside for two days until its odor forced some Igorots to cover it with dirt.

On his diary, which Major March found, Del Pilar had written: "The General [ Aguinaldo ] has given me the pick of all the men that can be spared and ordered me to defend the Pass. I realize what a terrible task has been given me. And yet, I felt that this is the most glorious moment of my life. What I do is done for my beloved country. No sacrifice can be too great." In World War I,  John J. Pershing and Peyton C. March were the American generals who gave the edge to Allied victory over Germany. Pershing was the commander of the American Expeditionary Forces (AEF) of two million men in France while, during the last eight months of the war, March was in Washington, D.C., as the chief of staff who oversaw the logistics and general development of the army, and the shipment of some 1.8 million troops across the Atlantic. As Secretary of War Newton D. Baker noted shortly after the war, "Together they wrought...victory." 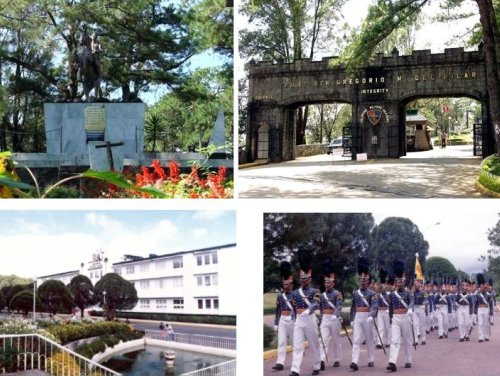 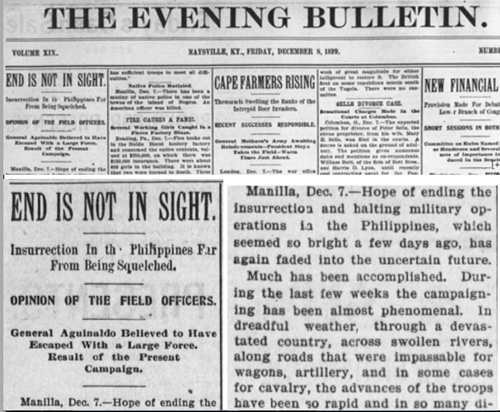 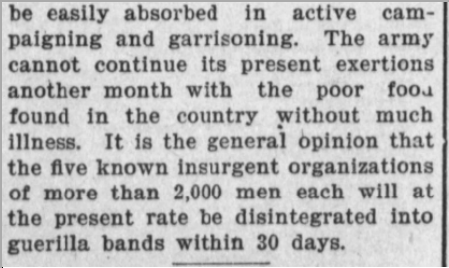 Soldiers of the 16th US Infantry Regiment (Regulars) haggling with Filipina vendors at their camp in Aparri, Cagayan Province, Cagayan Valley, northeastern Luzon Island.   The regiment occupied the valley after the surrender of General Daniel Tirona.   Photo taken in 1900.

On Dec. 11, 1899, Gen. Daniel Tirona surrendered in Aparri to Capt. Bowman H. McCalla of the US Navy cruiser USS Newark. 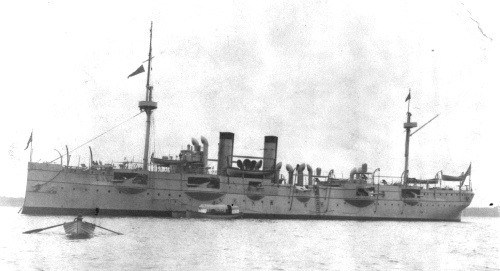 Sixteen months earlier, on Aug. 25, 1898, Tirona, a native of Kawit, Cavite Province, had seized Aparri from the Spaniards. Aguinaldo then appointed him as the military governor of the Cagayan Valley (comprised of the provinces of Cagayan, Isabela and Nueva Vizcaya).

Tirona's surrender was with the honors of war. Captain McCalla (RIGHT, in 1890) reviewed the Filipino troops, and Tirona reviewed the US naval units. The Americans presented arms while the Filipinos were stacking theirs; a total of 300 rifles were turned over.

The Linao Point lighthouse at Aparri, Cagayan Province, 1903. Built by the Spanish in 1896, it was destroyed by a storm and has never been rebuilt.

On Dec. 21, 1899, Otis directed the 16th US Infantry Regiment (Regulars), commanded by Col. Charles C. Hood, to proceed to Aparri. On the same day, Colonel Hood was appointed as the military governor of the Cagayan Valley.

A company of troops was garrisoned in each of the following towns:

[Daniel Tirona gained notoriety in Philippine history for humiliating Katipunan Supremo Andres Bonifacio at the Tejeros Convention on March 22, 1897; Bonifacio's subsequent actions led to his arrest, trial and execution on May 10, 1897. His brother, Procopio, died with him. Tirona became a founding member of the pro-American Partido Federal when it was organized on Dec. 23, 1900].