Maj. Gen. Henry W. Lawton in field uniform in the Philippines, 1899. The white helmet was worn by General Lawton in all of his Cuban and Philippine engagements.

After the capture of Malolos, the U.S. 2nd Division under Maj. Gen. Henry W. Lawton  was sent by Maj. Gen. Elwell S. Otis to the south into Laguna province, via Lake Laguna de Bay, to take the Filipino stronghold located in Santa Cruz, 48 miles (80 km) from Manila. The Filipinos were commanded by Gen. Juan Cailles. 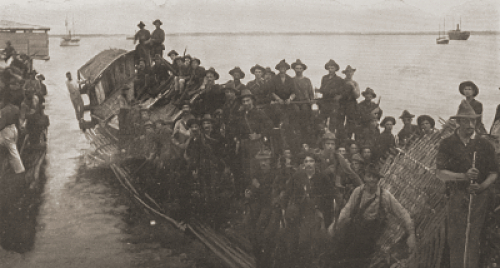 Original caption:  "Gunboat Laguna de Bay ---At the outbreak of hostilities this government was prepared to dislodge the insurgents from their strongholds along the Pasig and lake regions with the fleet of 'tinclads,' of which the above was the most formidable. Carrying two three-inch guns forward, two nordenfeldts at the stern and four Gatlings above, she poured a deadly fire that quickly routed the enemy." On April 9 at 10:30 a.m., landing craft began offloading Lawton's troops south of Santa Cruz. Darkness fell before all the troops could be landed, and a minor skirmish broke out to the Americans' right.

Early on April 10, General Lawton went ashore and cut the telegraph line into Santa Cruz, thus severing the Filipinos' connection with Aguinaldo in the north. At the approach to a bridge just outside of the town, which was heavily guarded by the Filipinos, Lawton ordered a charge and a battalion of the 14th US Regular Infantry Regiment supported by 1st Idaho and 1st Washington volunteers routed the local force. In the meantime, dismounted Troops C and L of the  4th U.S. Cavalry Regiment, which had not gone ashore the night before were landing under fire just north of the town. (Lawton served in the 4th Cavalry as a 1st Lieutenant and Captain from 1871 to 1888 and had commanded Troop B during the capture of the Indian chief Geronimo). The 4th Cavalry drove off the Filipinos on the beach with supporting fire from the gunboats  Laguna de Bay, Oeste and Napindan. That same day Lawton took control of Santa Cruz. 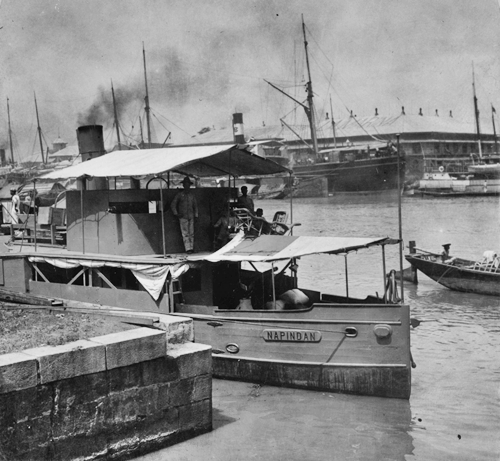 Dead and wounded Filipinos after Battle of Santa Cruz

The Americans suffered 1 dead and 6 men wounded at Santa Cruz, the Filipinos 96 killed with 41 taken prisoner. 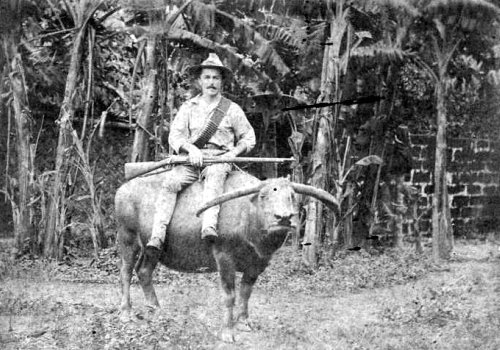 An American soldier poses for a photo atop a carabao (water buffalo), the Filipino farmer's beast of burden, circa 1899-1900, location not specified.

A private in the 14th US Regular Infantry was gored by a carabao (water buffalo) but he survived; he held the bull by the hindfoot and held him until the rest of his squad got together and shot the animal. General Cailles (RIGHT) and his men withdrew to Pagsanjan. On April 11, at 6:00 a.m., General Lawton began  the expedition to capture  Pagsanjan. A battalion of sharpshooters was sent ahead of the command as an advance guard, and as they came within 1.5 miles (2.5 km) of the town, they were fired upon by a small force of Filipinos from hastily built breatsworks blocking the road.

An artillery piece was brought up and fired two rounds into the breastworks, which were soon abandoned by most of the Filipinos. Some Filipinos remained in the breatsworks after the bombardment and were driven out as well after the sharpshooters gave the breastworks another heavy volley. Pagsanjan was captured with no further resistance. The Americans suffered 5 wounded against 6-8 Filipinos killed. Spanish monument at Pagsanjan appropriated by the Filipinos to honor Emilio Aguinaldo. The obelisk, called Aguja de Cleopatra (Needle of Cleopatra), was dedicated to Queen Regent Maria Cristina who ruled Spain during the minority of her son, King Alfonso XIII.

"In the town plaza of Pagsanjan was an old Spanish monument from which the people had taken the original inscriptions and put in their own inscriptions; one of these was to 'E. Aguinaldo, el Libertador.' In this town there was an air of so much refinement and wealth that it seemed strange, that such intelligent folk should run off before a civilized army, as if it were the hosts of Timur."

The US soldiers butchered chicken and geese abandoned by the fleeing townsfolk.

(LEFT) Another view of the Needle of Cleopatra in 1899, originally located in the town plaza; in 1961, it was moved to its present location (RIGHT) near the bridge spanning Balanac River.[Modern photo courtesy of Pagsanjan councilor Erwin P. Sacluti, who said that the present obelisk did not show the inscriptions to Aguinaldo.] The next day, April 12, 1899, the Americans launched another expedition to capture the town of Paete.

About 220 men began the march at 2:45 that afternoon. After about an hour, the Americans spotted Filipino breast works 150 yards in front of them, manned by 50 or so Filipino fighters. Major John Fraine, commander of the Ist North Dakota Volunteers, sent a small squad consisting of one corporal and four privates to flank the Filipino positions. Some Filipinos hiding in thick foliage flanking the road fired at close range on the small force, killing four.

The sole survivor, Private Thomas Sletteland (LEFT),  managed to drive back the nearest group of Filipinos, who repeatedly tried to seize the rifles of his fallen comrades.

He was later awarded the Medal of Honor.

Flanking and frontal infantry assaults, artillery fire and scathing gatling gun fire from the gunboat Laguna de Bay succeeded in dislodging the Filipinos from their entrenchments.

Lawton's command suffered 5 killed in capturing Paete; 15 Filipinos were kiled and wounded. The Laguna Campaign was over and deemed a success. During the entire campaign, the Americans suffered 7 killed and 21 wounded. They reported a total of 125 Filipinos killed and 40 captured. Sixty Chinese, who asked to be taken from Santa Cruz, were brought to Manila.

Lawton did not have enough men to occupy Santa Cruz permanently. General Otis called Lawtons expedition back, fearing they might be cut off. Otis also wanted Lawtons force back for a pending operation to the north by Maj. Gen. Arthur C. MacArthur, Jr. Paete:  US soldiers and young Filipino fruit vendors. Photo was taken on March 24, 1901. Known as the "Brains of the Katipunan", Emilio Jacinto was born in Trozo, Tondo, Manila, on Dec 15,1875. He was the son of Mariano Jacinto and Josefa Dizon. He was fluent in both Spanish and Tagalog, but he spoke more in Spanish. He studied in the Universidad de Santo Tomas, but did not finish college and at 20 joined the Katipunan. Because he was very brilliant, he became the advisor on fiscal matters and secretary to Andres Bonifacio. He also edited and wrote for the Katipunan newspaper "Kalayaan"--Freedom in Tagalog. He wrote in the newspaper under the pen name Dimasilaw, and in the Katipunan he was called Pingkian. Emilio Jacinto was the author of the Kartilya ng Katipunan. After Andres Bonifacio's death, he continued fighting the Spaniards. Majayjay Church and the town center in 1899

He contracted malaria and died at age 23 on April 16, 1899 in Majayjay, Laguna province. Later on, his bones were transferred to the Manila North Cemetery.