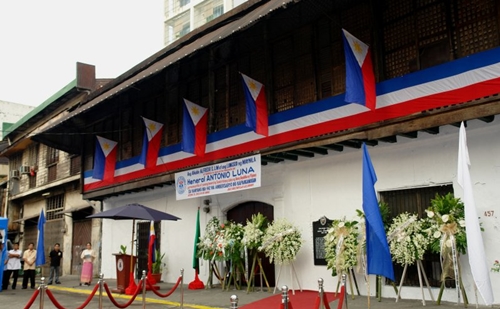 The house in Binondo district, Manila, where General Antonio Luna was born. Photo was taken on Oct. 29, 2008, the 142nd anniversary of his birth. Gen. Antonio Luna (LEFT, in 1898) was born in Urbiztondo, Binondo district, Manila on Oct. 29, 1866.  He was the youngest of seven children of Ilocano parents; his father, Joaquín Luna, hailed from Badoc, Ilocos Norte Province, and his mother, Spanish mestiza Laureana Novicio, was a native of Namacpacan (now Luna), La Union Province. His brother, Juan, is recognized as one of the greatest Filipino painters.

At the age of six, Antonio learned reading, writing, and arithmetic from a teacher known as Maestro Intong. He memorized the Doctrina Cristiana (catechism), first published in 1593, and believed to be the first book printed in the Philippines.

In Spain, Luna joined the Propaganda Movement, a cultural and  literary organization of  Filipino expatriates; it called for the assimilation of the Philippines as a province of Spain, Filipino representation in the Spanish legislature, freedom of speech and the press, and Filipino equality before the law. Like most of the Filipino reformists, he joined Masonry and rose to Master Mason. He commissioned Pedro Serrano Laktaw to secretly organize Masonic Lodges in the Philippines to strengthen the Propaganda Movement.

Luna also wrote in La Solidaridad, a newspaper published by the propagandists in Spain. He wrote under the penname "Taga-Ilog". 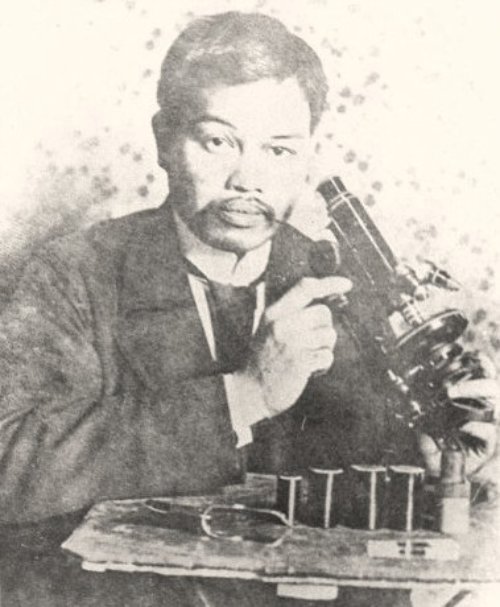 Antonio Luna poses with a microscope at the Institut Pasteur in Paris, France. PHOTO was taken in the early 1890's.

After receiving his doctorate, Luna went to Paris and  worked at the Institut Pasteur where he did research in histology and bacteriology under Professor Latteaux,  and to Belgium where he trained in medical chemistry under Professor Laffons. He contributed to the leading Pharmacy scientific journals of the day; his doctoral thesis on malaria, El Hematozoario del Paludismo, was published in 1893 and was well received by medical scientists and physicians.

In 1894 he went back to the Philippines with a commission from the Spanish government to study the bacteriology of contagious diseases.

Later that year, he won the post of Chemist Expert of the Municipal Laboratory of Manila. The Luna brothers: Antonio (LEFT) and Juan, the foremost Filipino painter at the time. 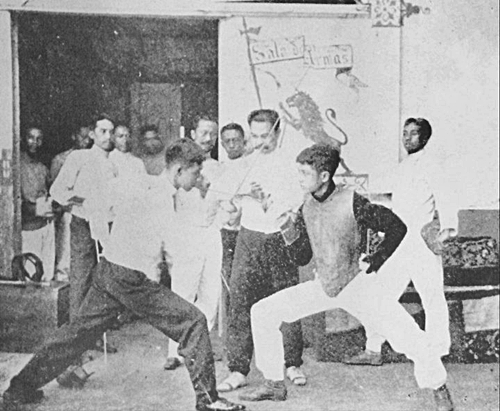 Lunas political activities in Europe and his friendship with leading propagandists made him a marked man at the start of the 1896 Revolution. Like Jose Rizal and other leaders, he favored reforms rather than independence. Even so, the Spanish authorities linked him with the militant Katipunan. 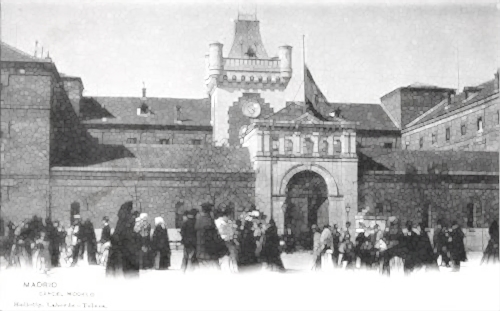 Luna was charged with illegal association and deported to Spain in 1897, and imprisoned at the Carcel Modelo (ABOVE, ca 1904) in Madrid.

Upon his release, he went to Belgium and studied military tactics and strategy under General Gerard Mathieu Leman (RIGHT, in WWI). He returned to the Philippines in July 1898. He was appointed by Gen.  Emilio Aguinaldo as Chief of War Operations on Sept 26, 1898 and assigned the rank of brigadier general. With President Aguinaldo's approval, he established a military academy at Malolos on Oct. 25, 1898. He was appointed commanding general of the Philippine Army on Jan. 23, 1899 and held that position until his assassination.

Luna had a volatile temper and sharp tongue. He was a strict disciplinarian and alienated many officers and men in the ranks. He fought gallantly at battles in Caloocan, Manila, Bulacan, Pampanga, and Nueva Ecija against better equipped U.S. forces. At Caloocan, the Kawit Battalion from Cavite refused to attack when given the order. The men told him they only took orders from General Emilio Aguinaldo, their townmate. He  promptly  disarmed them. He believed the Filipinos had a chance against superior American firepower by waging a guerilla war. He asked the aid of Aguinaldo's advisor Apolinario Mabini as early as April 1899 to convince the leader to adopt guerilla warfare. Aguinaldo chose to fight with a regular army as a sovereign nation would, only to revert to secret guerilla units beginning on Nov. 12, 1899.

On May 5, 1899, the Schurman Commission proposed what they called "autonomy" for the Philippines, but the US President would hold absolute power. About fifteen remaining members of the Malolos Congress met, accepted the offer, and asked President Aguinaldo to dismiss Apolinario Mabini and appoint a new cabinet.

On May 7, 1899, Aguinaldo appointed a new cabinet headed by Pedro Paterno. The new executive advisers favored Philippine autonomy under the tutelage of the United States. 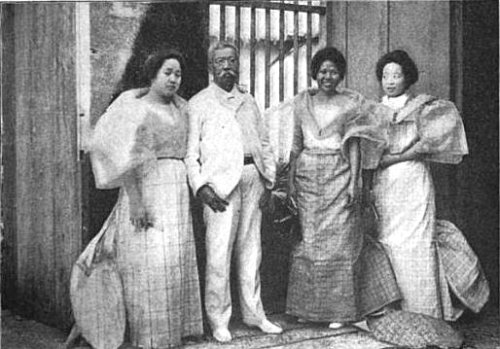 Felipe Buencamino with his daughters at his country house in San Miguel de Mayumo, Bulacan Province. PHOTO was taken on Dec. 25, 1904.

Paterno appointed a commission of nine to negotiate with the Americans; it was chaired by the Secretary of Foreign Affairs, Felipe Buencamino (ABOVE).

Like Mabini, Luna was very vocal against entering into any deal with the Americans. He strongly advocated a fight to the finish for independence.

On May 21, 1899, at Cabanatuan, Nueva Ecija Province, an enraged General  Luna  confronted the cabinet members. He yelled, To compromise with the enemy is to have a new era of slavery and suffering! 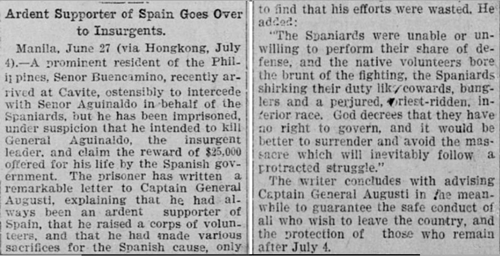 Luna slapped Buencamino, and called him a traitor and his son a coward. He had once been an ardent defender of Spanish rule and of the friars and a commander of the militia set up by Spain to fight the Americans. Captured by Filipino revolutionary forces, Buencamino (RIGHT, in 1914) had immediately become Aguinaldo's adviser and speechwriter. He became a founding member of the pro-American Partido Federal when it was organized on Dec. 23, 1900.

Luna arrested the Cabinet after calling everybody a traitor.  He turned over the men to Aguinaldo, but the Cabinet members were turned loose as soon as Luna left. These men then cautioned Aguinaldo that the hot-headed general was planning a coup d' etat  for June 13.

On June 4, 1899, Luna was directing the establishment of a guerilla base in the Mountain Province from his headquarters in Bayambang, Pangasinan

Province, when he received a telegram summoning him to a conference with President Emilio Aguinaldo in Cabanatuan, 75 miles (120 kms.) away. He immediately left for his appointment  accompanied by Col. Francisco "Paco" Roman,  Maj. Simeon Villa, the brothers Maj. Manuel Bernal and Capt. Jose Bernal, Capt. Eduardo Rusca, and a bodyguard of 25 cavalrymen.

If he had not been bogged down by his wounds, Colonel (later General) Benito Natividad (RIGHT) , who was then General Lunas top aide and a Nueva Ecija native, could have accompanied Luna to Cabanatuan instead of Colonel Roman.

On June 5, Luna and his party arrived at the outskirts of Cabanatuan but the broken bridge threatened to delay the whole party. The impatient General left his escort and proceeded to his summons accompanied only by Colonel Roman and Captain Rusca. At about 3:00 p.m., they arrived at the casa parroquial  (convent) in Cabanatuan where the Philippine Republic was holding office.

The first man the general met was an officer he had disarmed in Angeles for cowardice. His famous temper provoked, General Luna slapped a sentry who failed to salute him and, upon being informed that Aguinaldo had already left for San Isidro, Nueva Ecija (Aguinaldo actually went to Bamban, Tarlac Province), he ran upstairs and saw Felipe Buencamino. They exchanged heated words.

A rifle shot was heard and the general rushed downstairs to investigate, and there, waiting for him, were Capt. Pedro Janolino and members of the Kawit Battalion of Cavite Province. These were the same soldiers who had refused to take orders from Luna during the battle at Caloocan on Feb. 10, 1899; as punishment, Luna had disarmed and relieved them of their duties. The men mobbed him. Luna was stabbed with daggers and shot. Mortally wounded, he still managed to stagger to the street, away from his assassins. He fired his pistol, but didn't hit anybody. 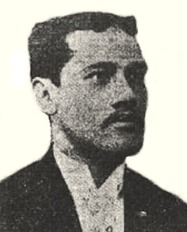 Colonel Roman (LEFT, born Oct. 4, 1869 in Alcala, Cagayan), came to his defense but was shot to death. Captain Rusca also tried to assist the stricken general  but was shot in the leg. He took refuge in the nearby church. Aguinaldo's mother, Trinidad Famy y Aguinaldo (RIGHT, in 1901) was said to have watched the killing. She shouted "Nagalaw pa ba iyan?" (Is he still alive?).

One of the assassins nudged Luna's body with his boot. The general was dead.

Buencamino emptied Luna's pockets and took the telegram that Luna had received. 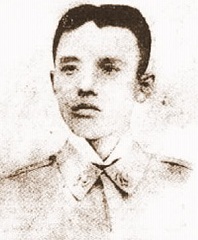 The following day, Luna was buried with military honors but the assassins went free.

After Luna's death, Aguinaldo ordered all chiefs of brigades under Luna arrested.

Some were killed like Major Manuel Bernal who was tortured first and his brother Captain Jose Bernal  (LEFT) who was released but was later assassinated at Candaba, Pampanga Province, on June 16, 1899.

Aguinaldo also ordered the disarming of two companies suspected of being pro-Luna. Years later, when asked about his role in the death of  Luna, Aguinaldo replied that he had nothing to do with it; in fact, he was no longer in Cabanatuan when the assassination took place. 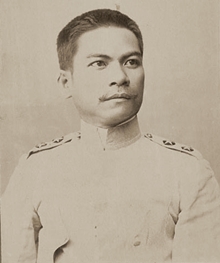 He further said that had he wanted the general disposed of cleanly, all that was needed was somebody to shoot him in the back in the thick of battle and nobody would have been any wiser.

[Interestingly, on the very same day that Luna died, Gen. Venancio Concepcion (LEFT), then in Angeles, received a telegram from President Aguinaldo. It was sent from the Cabanatuan telegraph office; the transmission time  approximated the time of Luna's assassination. Aguinaldo informed General Concepcion that he (Aguinaldo), had taken charge of the military operations in Central Luzon in place of General Luna. The President further informed Concepcion that he was on his way to Bamban;  it was going to be Aguinaldo's temporary executive and military general headquarters. Aguinaldo also said that Concepcion should meet him in Bamban at 4:00 p.m., the estimated time of his arrival. In fact, Aguinaldo and his party arrived at 7:00 p.m. via a special train. In his diary, General Concepcion wrote that there were instant loyalty checks among the officers and their respective commands in the headquarters that same night. It was only the next day, June 6, that General Concepcion learned about the death of General Luna and Colonel Roman.]

On June 14, 1899, the New York Times reported Luna's assassination, described the fiery general as "one of the most intelligent and turbulent of the Filipino leaders," and added that "Aguinaldo was in mortal terror of him."

On the same day, the San Francisco Call also came out with the news of Luna's death, blaming Aguinaldo for the murder: 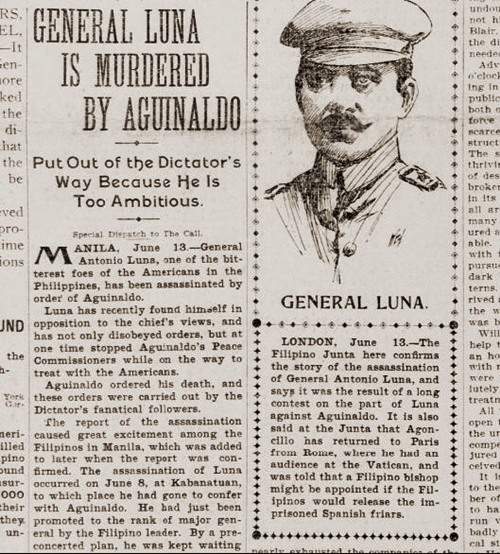