PEACE PROTOCOL, Aug. 12, 1898, 4:23 p.m., Washington, D.C. [August 13, 4:23 a.m. in Manila] :  Jules Cambon, Ambassador of France and representing Spain [SEATED, left] and William R. Day, U.S. Secretary of State [SEATED, near center], sign the protocol suspending hostilities and defining the terms on which peace negotiations were to be carried on between the United States and Spain. The protocol was signed in the presence of Pres. William R. Mckinley [STANDING, 4th from right].

The mock battle of Manila was staged on August 13. At he battle for commenced.  Admiral Dewey had cut the only cable that linked Manila to the outside world on May 2nd; news of the war's end reached neither General Jaudenes or Admiral Dewey until August 16th. 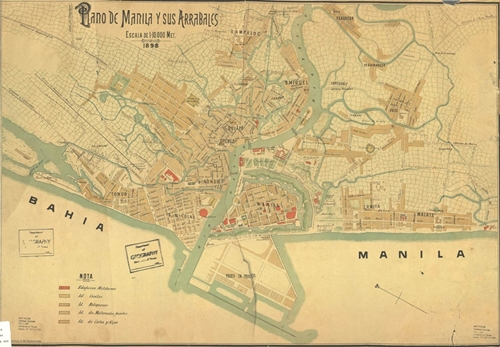 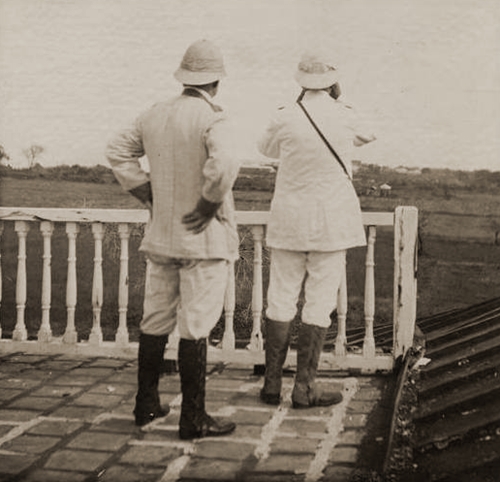 13th Minnesota Volunteers fighting in the woods near Manila

Capt. Thomas Bentley Mott, aide to Maj. Gen. Wesley Merritt, wrote:  "...the bugle sounded the advance, the whole camp sent up a tremendous cheer, showing that neither rain, the darkness of the night, nor the unseen foe could dampen the involuntary delight of the men at the idea of at last getting at their enemy." General MacArthur's 1st Brigade began its movement towards the Spanish positions on the road leading to .  The terrain was swampy, the roads muddy, but by a.m. most of the elements had reached their forward positions and taken shelter for the opening volley. 1st Nebraska Volunteers moving on the seashore toward Manila 1st Colorado Volunteers kneeling on the beach to fire

Less than a mile to the west, General Greene's 2nd Brigade was making its advance along the beach.  Leading the way was the 1st Volunteer Infantry Regiment, followed by volunteer regiments from , , , , and .  Ahead lay the Spanish fortification at Malate district, Fort San Antonio de Abad.

Company I of the 1st Colorado Volunteers advances through the grass At  Admiral George Dewey's ships (the cruiser Olympia and the gunboat Petrel) began bombarding Fort San Antonio de Abad. There was only sporadic and light return fire. As the 1st Colorado Volunteers  neared its walls, the naval bombardment stopped. The fort was deserted, save for two dead and two wounded Spaniards. At 10:35 a.m. Capt. Alexander M. Brooks of Denver, raised the Stars and Stripes over the captured fort. Original caption: "Bamboo intrenchment of the Filipinos across the Manila and Dagupan railway. The cannon is a bronze piece captured from the Spaniards, June 1898".

As the naval bombardment ended and the American forces continued north in two columns, the Filipinos --- who had not been apprised of the script ---raced to join the battle. They thought there was a real battle going on that would liberate their capitol and they did not want to be left out. 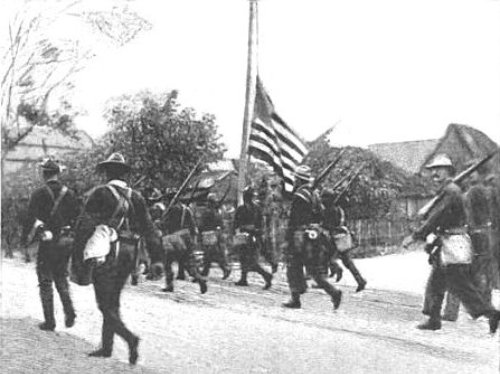 Blockhouse No. 14. Around this spot a great deal of the fighting of August 13 took place. A shell from a Utah gun took away the corner. The gun that destroyed Spanish Blockhouse #14

Meanwhile, in the east, MacArthur's 1st Brigade moved through the Spanish trenches, overran Blockhouse #14, and confronted the Spanish position at Blockhouse #20 near Singalong. 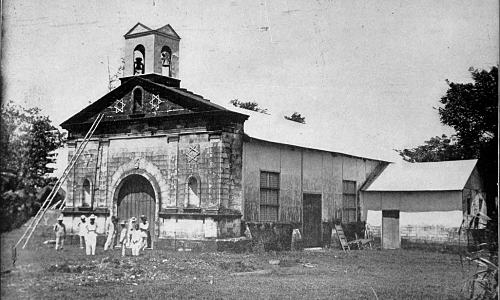 The church at Singalong district, Manila, where the Astor Battery and 13th Minnesota Volunteers engaged the Spanish behind entrenchments When the 1st Brigade's 13th Minnesota Volunteers approached, the Spanish defenders fired a few rounds in a token resistance.  It was met by a similarly light return fire from the Americans.  Hearing the sound of the skirmish, the Filipinos rushed into the foray.  A pitched battle ensued, the soldiers of the 13th caught in a cross-fire between the Spaniards ahead of them and the Filipino forces behind them.

The men of the Astor Battery charged the stronghold in a pistol attack which saw the Spanish withdraw. It was probably at Blockhouse #20 that the Americans prohibited the Filipinos from proceeding any farther, and MacArthur's advance the rest of the way to the central city was unopposed. US Third Artillery acting as infantry. In backqround is the strongest Spanish blockhouse outside the walled district of Intramuros, Manila.

At 11:00 a.m., as the two American columns converged on Intramuros, Admiral Dewey hoisted the international signal flag  "Do you surrender?".

Meanwhile, General Greene and his troops had reached the Luneta, the city promenade (ABOVE, pre-war 1890's), where they were  confronted with a heavily defended blockhouse, and a group of Spanish soldiers who, like the Filipinos, apparently were not privy to the unfolding script. 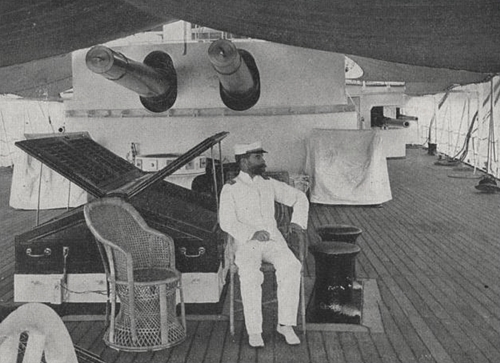