After pushing back the Filipino lines in the first battle of Manila and the suburbs on Feb. 4-10, 1899, Maj. Gen. Elwell S. Otis waited for more reinforcements from the United States.

Aguinaldo used the lull to reorganize and discuss plans for taking Manila. The districts of Tondo, Santa Cruz, and Malate were to be set on fire. The attack occurred on February 22. At around 8:00 p.m., fire broke out in the wealthy quarter of Santa Cruz district (during the 19th-century, the parian neighborhood of Santa Cruz commanded the highest in rental prices, compared to those in other districts of Manila. Businessmen, especially the foreigners, preferred the structures of Santa Cruz, especially those warehouses along the Pasig River, which facilitated the swifter delivery of their merchandise through the cascos or boats that plied the citys esteros). 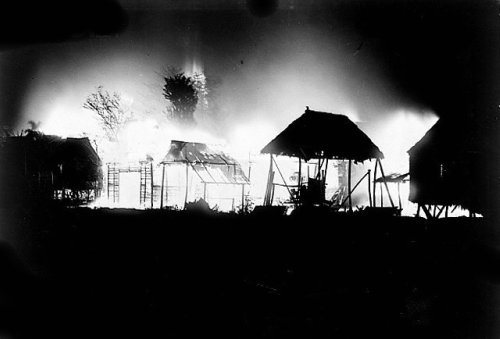 John Bass, a correspondent from Harper's Magazine, describes the event as "Manila's Night of Terror." Escolta, the principal business street in Manila. Photo taken in 1899.

Fire spread towards the Escolta business area. John Bass reported: "Someone was cutting the hose. The firemen were suspected. At last a soldier caught a Malay bending over the hose and prodding it with a large knife. The soldier bringing his rifle down with a violent blow, broke the native's back." Feb. 23, 1899: A house in Tondo set on fire by Filipinos. The U.S. Army reported that 60 buildings of stone, 150 substantial wooden structures with iron roofs, and about 8,000 nipa houses were destroyed. Original caption:   "Driving the insurgents out of the burning nipa section of Tondo district."

Another fire broke out in Tondo. Luna's men led by Col. Francisco "Paco" Roman had infiltrated the rear of the American lines and pushed towards Tondo. Another element from Roman's group rushed deep into Calle Jolo (now Juan Luna St.). The fire, the blare of guerrilla bugles and the shooting confused the Americans. They made their stand on Calle Iris near the Bilibid Prison and waited for reinforcements. Chinese quarters and business street in Manila. Photo taken in 1898 or 1899.

By now the Binondo market was on fire, but Lucio Lucas --another Luna officer--and his men failed to reach the Meisic police station, his prime objective ((Meisic derived from "Maintsik", which today is Manilas Chinatown).

The Americans had learned of the planned attack earlier, and were prepared to meet him. Lucas's men retreated towards Calle Azcarraga.  In hand-to-hand combat they broke through the American detachment there and disappeared into the night. The Americans counter-attacked the next day with fresh troops and gunboats. They pushed the Filipinos into Tondo (LEFT, dead Filipinos on a Tondo street). At the tramway station, Paco Roman's men resisted until late in the morning. Others were able to hold a blockhouse but had to withdraw for lack of ammunition.

On February 24, General Luna reported to Aguinaldo that had it not been for the refusal of the Cavite soldiers to attack when ordered, "our victory would have been complete."

General Otis, horrified by Luna's bold plan, admitted that the attack was "successful in its inception and primary stages."

Aguinaldo took propaganda advantage of the small victory even as Luna accused him of holding back the Cavite soldiers (Aguinaldo's provincemates). American photograper's caption: "At the battle of Tondo ---work of Minnesota men." Original caption:   "An old man killed while picking chicken in the Filipinos' headquarters in Tondo during the insurgent outbreak."

Luna's attack plan, though a good one, failed for lack of coordination and sufficient firepower. General Luna managed to provide artillery support by using a single Krupp breech-loading cannon firing a six-inch projectile weighing 80 pounds. It was manned by Spanish prisoners with MacArthurs Headquarters at the house of Engineer Horace L. Higgins as target. Higgins was the general manager of the English-owned Manila Railway Company. This singular artillery piece was neutralized by American counter-battery fire.

A Chinese shop near the carhouse of the Manila Railway Company at Tondo, where the Filipinos barricaded the streets. They fought from inside the wall to the left with the lamp on top. 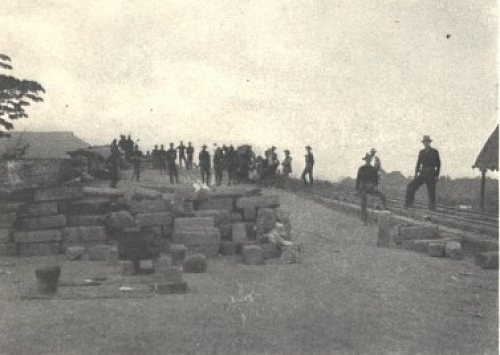 Bridge in eastern Tondo, fortified by the Filipinos with stone blocks, behind which they fought. 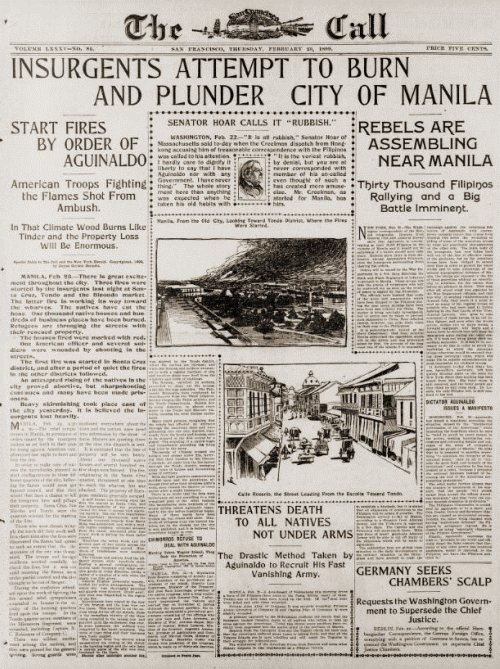 "Bomberos"  of the Manila Fire Department, Photo taken in 1899. An American artist wrote at the back of this photograph: "Never known to get there on time." Refugees from the fighting and fire at Tondo.