Troops of the 9th US Regular Infantry Regiment  at Las Piñas

A force of 4,500 American troops assembled on June 10, 1899 at San Pedro de Macati to conduct a campaign south of Manila to sweep the country between Manila Bay and Laguna Lake. They were commanded by Maj. Gen. Henry Lawton, Brig. Gen. Loyd Wheaton and Col. Samuel Ovenshine. The Americans quickly broke through the Filipino lines. They entered an area known as "El Desierto", a barely cultivated road-less expanse of thickets, head high grassland, rice-fields, ridges and gullies. Snipers raked the footpaths, forcing the US troops to march in extended skirmish order through the ravines and scrub.

The gunboat Helena (ABOVE, LEFT) and the double-turreted USS Monadnock (ABOVE, RIGHT) shelled the coastal towns of Parañaque and Las Piñas all day with the full power of their batteries. Near Las Piñas, at the base of Telegraph Hill, the Filipinos launched a determined attack, but were beaten back by the Americans defending the hill. The heat during the battle proved overpowering to the Americans. Most threw away their ponchos, blankets and haversacks, everything but rifles, ammunition, and canteens. It was estimated that forty percent of the troops had heat exhaustion. Capt. Henry Nichols, Commander of the Monadnock, died of heat stroke the day following the battle.

The Americans suffered 2 men killed in action and 21 wounded. The Filipinos lost 50 men killed and 20 captured. Original caption: " View looking up the Parañaque road toward from the insurgent trench commanding it : Rizal province -- 1899." Unexploded 10-inch shell fired by the U.S.S. Monadnock, after penetrating a six-foot trench and killing 3 Filipinos 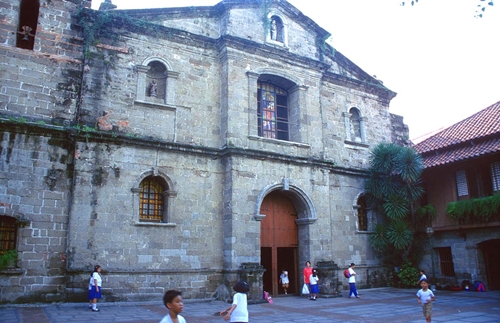 The church at Las Piñas in contemporary times A portion of the church at Parañaque shattered by shot and shell. Original caption:  "Victorious American soldiers gathered in the Main Street of Paranaque, the morning after its surrender--Filipino flags of truce displayed--the celebrated 'Buck' Harlan and his Washington Scouts in the foreground.". PHOTO was taken on June 11, 1899. 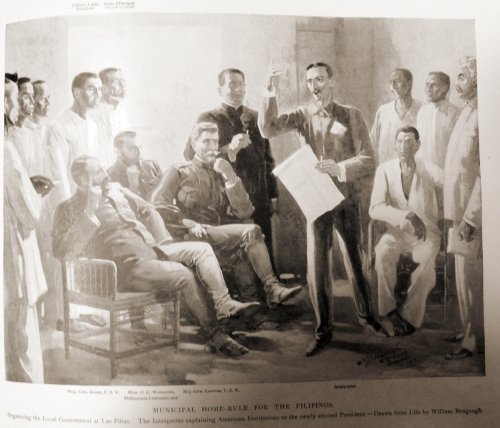 "Municipal Home-Rule for the Filipinos/Organizing the Local Government at Las Piñas. The Interpreter explaining American Institutions to the newly elected President.Drawn from Life by William Bengough."   Harper's History of the War in the Philippines (1900).

[Seated are Brig. Gen. Frederick D. Grant; Dean C. Worcester, Philippines Commissioner, and Maj. Gen. Henry W. Lawton. Standing behind Gen. Grant is Calixto Laral, President, and, to his left, Paulo Ellanigat, Vice-President. The American officials all have chairs. Only one Filipino is seated. The newly elected president is standing]. The action at Zapote, Cavite is also known as the Battle of Zapote River. It was fought on June 13, 1899 between 3,000 American soldiers led by

Maj. Gen. Henry Ware Lawton and 5,000 Filipinos commanded by Generals Artemio Ricarte and Mariano Noriel (RIGHT). It was the largest battle of the Filipino-American War. It was this battle that Filipino soldiers earned the respect of General Lawton, whose dispatches invariably carried a sympathetic note of the heroism displayed by Filipinos fighting for their freedom.

Capt. William H. Sage, 23rd US Infantry Regiment, won his Medal of Honor by volunteering to hold an advanced position. With 9 men he fought under a heavy fire from the Filipinos. Taking up a rifle from a wounded man he personally killed 5 Filipinos and held them in check until his squad had reached the safety of the American line. [Sage, West Point Class of 1882, rose to Brigadier General and served with the American Expeditionary Forces in France in World War I.]

The New York Times reported that the Filipino force at Zapote Bridge was "the largest and best organized body of men which had yet met American troops."  Accurate American rifle and machine gun fire inflicted terrible losses on the Filipinos, who were armed with a motley of firearms or bolos, and did not have the firepower to successfully retaliate on most occasions. American gunboats also devastated the Filipino positions.

US soldier with Filipino smooth-bore cannon captured at Zapote 10th Pennsylvania Volunteers with big muzzle-loader captured from the Filipinos at Bacoor, near the Zapote River, June 13, 1899.

Zapote River separates what is now the city of Las Pinas in Metro Manila from Bacoor, Cavite. Zapote Bridge in ruins still stands along the General Emilio Aguinaldo Highway near Manila Bay.

Muzzle-loader captured from the Filipinos at Bacoor, near the Zapote River, June 13, 1899. The rear guard of Company L, 4th US Infantry Regiment (Regulars), at the Battle of Dasmariñas, Cavite Province. Photo taken on June 19, 1899. 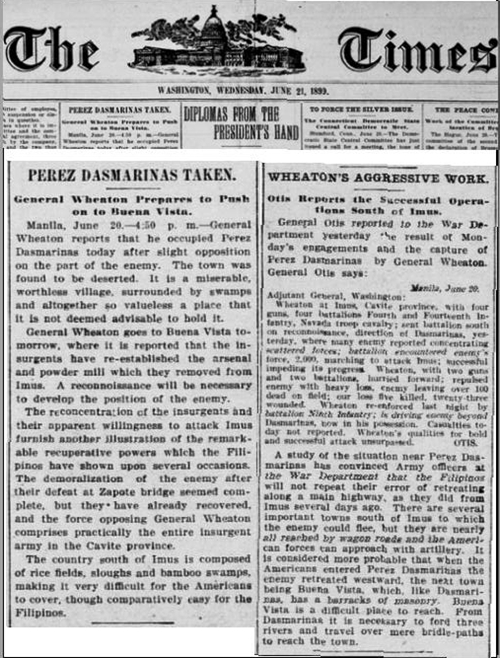 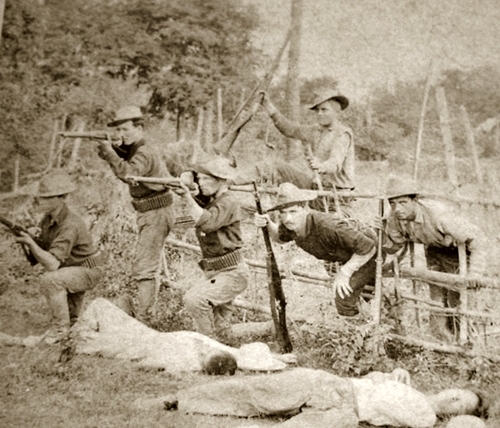 Scouts of the 4th US Infantry Regiment (Regulars), in what appears to be a posed photo, 1899.