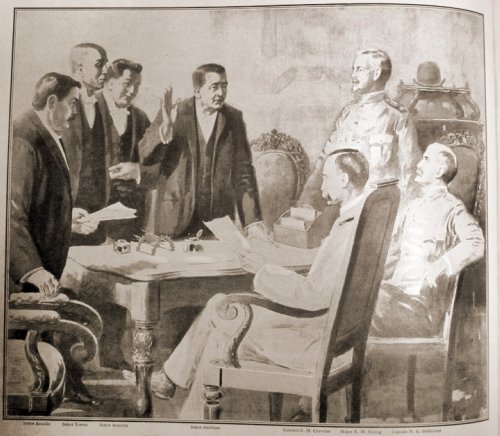 "The Filipino-American Supreme Court of Manila/Colonel Crowder Administering the Oath of Office to the Filipino Judges.Drawn from Life by William Bengough."   Harper's History of the War in the Philippines (1900)

Prior to the American invasion, the highest judicial body with jurisdiction over the Philippines was the Supreme Court of Spain sitting in Madrid. Locally, the highest court was the Audiencia Territorial de Manila (literally, "Regional Court of Manila"), with two branches, Sala de lo Civil, and Sala de lo Criminal.

When Manila fell to the Americans on Aug. 13, 1898, Gen. Wesley Merritt, Commanding General of the 8th U.S. Army Corps and military governor of the Philippines, suspended the criminal jurisdiction of the Audiencia  Territorial and organized military commissions or court martial or provost courts.

On May 29, 1899, Maj. Gen. Elwell S. Otis, who succeeded Merritt, consulted with Cayetano Arellano, a collaborationist Filipino lawyer who had occupied a high position in Aguinaldo's government, and re-established the Audiencia Territorial, with the following general orders: 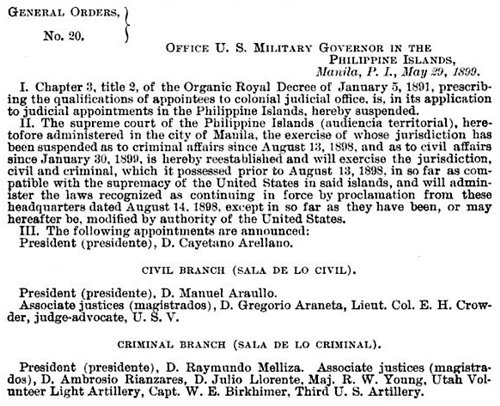 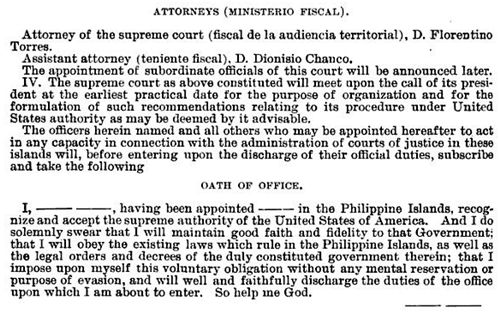 The Orders gave the new Audiencia Territorial de Manila jurisdiction over civil and criminal cases but only insofar as this was compatible with the sovereignty of the United States.

The present Supreme Court of the Philippines traces its roots only from June 11, 1901 when Act 136 of the Second Philippine Commission granted it genuine judicial independence. The judicial structure introduced by Act 136 was reaffirmed by the US Congress with the passage of the Philippine Bill of 1902.