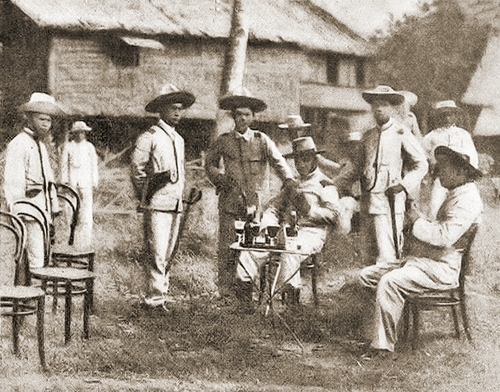 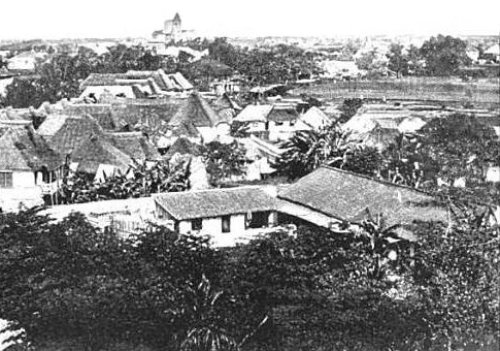 The brigade consisted of elements of the 1st Tennessee Volunteer Infantry Regiment,  18th US Regular Infantry and 6th US Artilley. The Americans At 9:30 a.m., Saturday, February 11, the gunboat Petrel and the cruiser Baltimore bombarded the Filipino shore trenches. Forty-eight marines from the Boston and a company from the Petrel were sent ashore. The Filipinos retreated.

The Filipino soldiers burned Iloilo to prevent the Americans from making it as their base of operations. The Swiss consul's residence was burned. The entire Chinese and native sections of the city were destroyed, but foreign mercantile property escaped with slight damage.

The Semi-Weekly Gazette and Bulletin of Williamsport, Pennsylvania reports on the capture of Iloilo, issue of Feb. 14, 1899.

"The building had been taken possession of by a United States officer, and he looted it to a finish. I suspected something and followed one of his men to the place. I expected to be jumped on by the officer as soon as I found him there, as I was away from my post, but it seems he was afraid I would give him away; in fact, we were both afraid of each other. He was half drunk, and every time he saw me look at anything he would say, "Tennessee, do you like that? Well, put it in your pocket"........The house was a fine one, and richly furnished, but had been looted to a finish. The contents of every drawer had been emptied on the floor. You have no idea what a mania for destruction the average man has when the fear of the law is removed. I have see themold sober business men tooknock chandeliers and plate-glass mirrors to pieces just because they couldnt carry them off. It is such a pity." On February 14, the town of Santa Barbara was captured by the Americans. Next they captured Oton, Mandurriao, and Jaro.

American forces occupied Cebu on February 22 and Bacolod on Negros Island on March 10. Before the Fil-Am War broke out, General Leandro Fullon was appointed by Emilio Aguinaldo as commanding general of all Filipino forces in the Visayas. On Sept. 6, 1898 he left Cavite at the head of an expeditionary force to Panay Island.  He arrived in Pandan, Antique Province, on Sept. 21, 1898 with 140 officers and 340 men. Together with Generals Ananias Diokno (from Luzon) and Martin Delgado (from Iloilo), they led Filipino troops against Spanish forces under General Diego de los Rios.

Throughout the conflict with the Americans, Fullon urged military leaders on the island--both from Luzon and Panay-- to remain united. There was tension between the Luzon  troops and those indigenous to the Visayas. The short-lived Malolos government had feeble authority over the revolutionary movements in the Visayas and Mindanao.

The Provisional Revolutionary Government of the Visayas and Mindanao, established on Nov. 17, 1898 in Sta. Barbara, Iloilo, was fuelled by federalist tendencies. These clashed with the unitary and centralized tendencies of the Malolos Congress where Tagalogs overwhelmingly outnumbered representatives from other regions.

The Visayans resented attempts by Malolos to assert its authority. The Luzon force was regarded by the Visayan revolutionaries, led by the Visayan supremo, Gen. Martin Delgado, as an ''invasion'' force.

Ananias Diokno was born on Jan. 22, 1860 in Taal, Batangas Province. He distinguished himself against the Spaniards in the Batangas-Laguna-Tayabas zone.

On April 28, 1899 President Emilio Aguinaldo appointed him as the civil and military governor of Capiz Province. He undertook guerrilla warfare against the Americans on Panay Island.

On March 18, 1901, Capt. Peter Murray, 18th US Infantry and 1Lt. Frank C. Bolles, 6th US Infantry, with detachments, located Diokno at Barrio Dalipdan, Capiz. Diokno was wounded and captured; two of his men were killed and 3 captured.

Ananias Diokno was the grandfather of Jose "Pepe" Wright Diokno, famed nationalist, human rights advocate, CPA and Bar Topnother, lawyer, secretary of justice and senator, who died of cancer in 1987 at the age of 65.

Martin Teofilo Delgado (RIGHT) was born on Nov. 11, 1858 in Sta. Barbara, Iloilo, the second child of a rich and aristocratic Spanish mestizo family. He finished his early schooling at Sta. Barbara Parochial School. Later, he enrolled at the Seminario de San Vicente Ferrer in Jaro. For further studies, he enrolled at the Ateneo Municipal in Manila and obtained his diploma as a school teacher. After finishing his studies in Manila. he returned to his hometown and taught in a public school for some time.

Shortly after Commodore George Dewey had smashed the Spanish fleet at Manila Bay on May 1, 1898 and blockaded the capital, the hard-pressed Spanish colonial government  organized Filipino volunteer militia in the different regions of the Philippines. General Ricardo Monet, the Politico-Military Governor of Iloilo Province, appointed Martin Delgado as captain and commander of the 125-strong Voluntarios in Sta. Barbara.

Delgado and his men turned around and joined the revolution against Spain.

On Nov. 17, 1898, at the plaza of Santa Barbara, Delgado proclaimed the Provisional Revolutionary Government of the Visayas and Mindanao. He raised the Philippine flag sent by General Emilio Aguinaldo. It was the first time that the Filipino national flag was hoisted outside of Luzon Island. When the flag reached the top of the bamboo pole, the air reverberated with cries of  Viva Filipinas! Fuera España! Viva Independencia!  The band struck up the Marcha Libertador  composed by General Delgado's brother Posidio.

The provisional government was later replaced by a Politico-Military Government on Nov. 23, 1898, composed only of the Visayas, because the Visayan leaders finally preferred instead, a federal arrangement composed of --Luzon, Visayas, and Mindanao, as a logical substitute because of its indigenous elements.

With the merger on Dec. 2, 1898 of the Independent Republic of Negros and the Cantonal Government of Bohol (established in August-1898); the Panay government that included Romblon (part of Capiz), based in Iloilo was renamed Federal Republic of the Visayas, patterned after the U.S. Federal and Cantonal government of the Swiss Confederation.

On April 28, 1899 President Emilio Aguinaldo abolished the Federal Republic and appointed Delgado as the civil and military governor of  Iloilo Province under the central Philippine government. He waged guerrilla warfare against the Americans on Panay Island. On April 11, 1901, the Americans appointed Delgado as the first governor of Iloilo Province effective May 1st; he served until 1904. Teresa "Nay Isa" Magbanua y Ferraris, "Visayan Joan of Arc", was born in Pototan, Iloilo on Oct. 13, 1868. She studied at the Colegio de San Jose in Jaro, Iloilo; in 1885, she was sent to Manila and enrolled at Colegio de Santa Rosa and then at Colegio de Santa Catalina to train as a teacher. She was a classmate of Dona Aurora Aragon, later the first lady of President Manuel Quezon of the Commonwealth. Teresa (RIGHT, in old age) finally obtained a teacher's certificate from the Colegio de Dona Cecilia in 1894. She taught at several schools in the province of Panay. When she married Alejandro Baldero, a rich landowner from Sara, Iloilo, she gave up her teaching career to work on the farm. While on the farm, she learned the rough ways of farm life, learning how to ride a horse and fire a pistol. By then however, the Philippine revolution had started and two of her brothers had become officers in the revolutionary army.

Teresa joined the revolutionary forces at the age of 28. In the battlefield, she bravely led men soldiers. Her unit won the battle of Sap-ong near Sara, Iloilo. The commander of the Revolutionary foces in the Visayas, General Martin Teofilo Delgado, commended her bravery and military abilities and entrusted her leadership in many military encounters throughout Panay island. Nay Isa fought the Americans in the Battle of Iloilo City on Feb. 11, 1899. No official record exists that proves Aguinaldo had promoted Magbanua to the rank of general. But her troops considered and addressed her as such. After the fall of the Filipinos' regional headquarters in Sta. Barbara, Magbanua shifted to guerrilla tactics. Her brother Elias died at age 19 from the bullet of a Filipino guide working with the Americans. In 1900, she disbanded her unit and surrendered.

Nay Isa remained childless and was widowed shortly after the outbreak of the war with the Japanese. Teresa sold all her property in Iloilo to help finance the guerrilla forces. She migrated to Mindanao and lived with her sister, Maria, in Pagadian, Zamboanga del Sur. Here she would die in August 1947 at the age of 78, with the rare distinction of having fought all of her country's colonizers. Iloilo, Feb. 11, 1899: Original caption: "The house on the left side of the street remains intact after the American invasion of Iloilo; the house on the right was not as lucky." Iloilo: Americans lined up for mess at their headquarters kitchen. Photo taken in 1899. 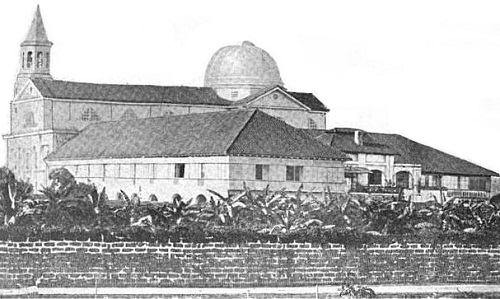 Chinese shoemakers in Cebu. Photo was taken in 1899.