Macabebe Scouts : Photo published in Harper's Weekly, Dec. 23, 1899.  These pro-American Filipinos were natives of Macabebe, Pampanga Province, in the central plains of Luzon Island. They had originally been loyal to Spain.

The US Army organized special forces officered by Americans but manned by Filipinos. The first unit of this type was experimental, one company of 100 Macabebes enlisted on Sept. 10, 1899, for a term of 3 months and led by 1Lt. Matthew Batson, U.S. Army. It was experimental in the sense that Batson's superiors - including Brig. Gen. Arthur C. MacArthur, Jr. - did not trust any Filipino enough to arm them; Batson had used the Macabebes as guides and interpreters earlier, and was convinced of Macabebe loyalty. The experiment proved successful, with the Macabebes fiercely loyal to their new masters. [The Macabebes were believed to be descendants of Mexican Yaqui Indians who were brought to the Philippines by Spain.] Sept. 29, 1899:  A squad of the 24th U.S. Infantry Regiment is attacked by a small party of Filipinos near Mexico, Pampanga Province.

A month after the first company was organized, four other Macabebe companies were created, and in the next two years, Ilocano, Cagayano, Boholano, Cebuano, Negrense and Ilonggo companies were formed, in addition to more Macabebe companies. The Americans specifically did not form any Tagalog companies because they feared they might turn against the Americans. These units fought battles, guarded strategic areas and camps, guided and interpreted for U.S. troops. The American commanders noted their loyalty and martial skill, but the top commanders still did not trust armed Filipinos. Filipino Scouts: Photo was taken in 1899. When a close friend, 2Lt. Henry M. Boutelle, 3rd Artillery, was killed in an ambush on Nov. 2, 1899, 1Lt. Matthew Batson ordered his Macabebe Scouts to "annihilate" the nearest town, explaining that "it helped revenge Boutelle."

The Filipino scouts were officially considered civilian contract employees and only lightly armed, partly because of fears that they would rebel, and also partly because they sometimes tended to be overly cruel to captured Filipinos suspected of being members of the resistance. Original caption:  "Church celebration on account of the enlistment of Macabebes into the United States Army, Macabebe, P.I."   Photo was taken in 1900 Macabebe Scouts undergoing inspection by 1Lt. Matthew Batson in Macabebe, Pampanga Province. Photo was taken in 1900.   By March 1900, there were about 478 officers and men in the native force that supported the U.S. army. Macabebe Scouts in formation.  On March 23, 1900, a Macabebe Scout unit reported that their 130 prisoners were all killed "in an attempt to escape." 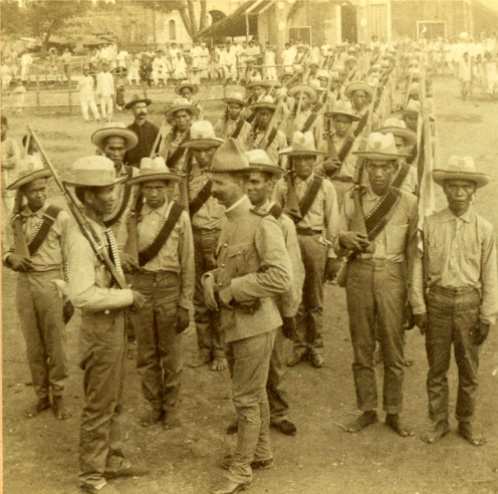 Macabebe Scouts in 1900. 1Lt. Matthew Batson, the commanding officer, is standing at far left.   On June 1, 1900, the native force of scouts was given a title, "The Squadron of Philippine Cavalry, U.S. Volunteers."  By December 1900, the number of men comprising this force had risen  to 1,402. 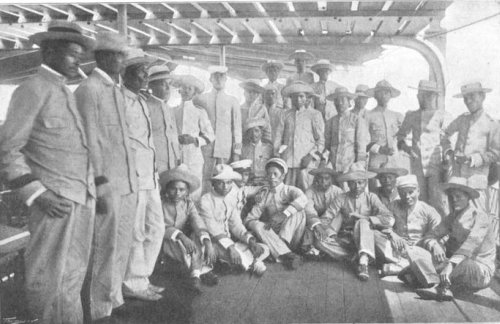 Macabebes who served in the Spanish army on board the Spanish ship Alicante at the port of Barcelona, June 8, 1900. They were members of Battalion No. 6 commanded by Col. Eugenio Blanco, a Philippine-born Spaniard. Six days later, they proceeded to Madrid where the Spanish government decorated them for gallantry in battle against Filipino rebels and loyalty to Spain during the American invasion of the Philippines. Not until Feb. 2, 1901 were Filipinos allowed to officially become members of the U.S. Army. The different Filipino scout companies officially became known as the Philippine Scouts. The Philippine Scouts took over from U.S. troops, many of whom were volunteers and whose enlistments were up and thus went home. The organization was a part of the regular U.S. Army, but it was a segregated unit: its men could not transfer to other non-Filipino units of the U.S Army, and pay scales of the men was less than half that of the regular American soldier. American officers in the Philippine Scouts, circa 1901

The Philippine Scouts became an elite unit of the U.S. Army in the Philippines; the American officers of the various Scout units had nothing but praise for the fighting abilities of their men. They coddled them and condoned their abuses.

On Feb. 26, 1901, a letter written by an American, signed  "An Outraged Citizen", was addressed to General MacArthur, beginning:

"It is simply horrible what the Macabebe soldiers are doing in some of the towns.... The Macabebes are committing the most horrible outrages in the towns and the officers say nothing, but, on the contrary, punish and threaten any persons who make complaint.... Some twelve days ago some Macabebes went into a house, and four soldiers raped a married woman, one after another, in the presence of her husband, and threatened to kill him if he dared to say anything. The war will never come to an end this way, nor will the country be pacified. The people are compelled to take to the woods." Filipino scouts.   By June 30, 1901, the strength of the Philippine Scouts, U.S. Army, had increased to no less than 5,500.  The men were known familiarly as "Macabebes" and "Ilocos scouts", these being the two ethnic groups from which the force was primarily made up. A marine patrol near Olongapo

During the period Sept. 18-23, 1899, an American squadron consisting of the monitor Monterey, cruisers Baltimore and Charleston, gunboat Concord and transport Zafiro shelled and seized the Filipino positions at Olongapo, Zambales Province, securing control of Subic Bay on the west coast of Luzon Island.

The town itself was garrisoned only on Dec. 20, 1899 by a company of US marines. The Presidencia Municipal at Olongapo, circa 1900. 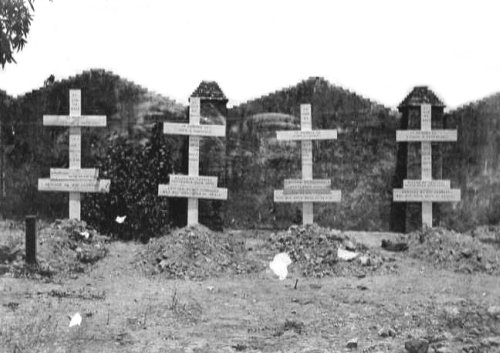 Graves of four US marines at Olongapo. One of the marines drowned, while the rest died in combat against the Filipinos. PHOTO was taken in 1902.

Subic Bay's strategic location, sheltered anchorages and deep water were exploited by the U.S. Navy. The American naval base at Subic Bay became the largest U.S. Navy installation in the Pacific. It was a major ship-repair, supply, and rest and recreation facility.

Unlike the rest of the Philippines which gained independence from the United States after World War II on July 4, 1946, Olongapo was governed as a part of the United States naval reservation. After intense lobbying by Filipino-American James Leonard T. Gordon, it was relinquished to the Philippine government and converted into a municipality on Dec. 7, 1959, although the Americans remained in control of Subic Bay.

On Nov. 24, 1992, the Americans had to withdraw from Subic; the Philippine government declined to extend the 1947 treaty that allowed them to maintain military bases in the country.This withdrawal marked the first time since the 16th Century that no foreign military forces were present in the Philippines.

South of Manila the Filipinos showed considerable activity in attacking the American line on both sides of the Tibagan River from Imus northward to Bacoor and Parañaque. On Oct. 2-3, 1899, 3 Americans were killed and 9 wounded at Imus. On October 4, the Filipinos set a large section of Parañaque on fire.

He reported that not less than 100 Filipinos were killed and 400 wounded. American losses were 3 killed (all officers:  Captains Woodbridge Geary, Marion Saffold, and Hugh McGrath) and 23 wounded. 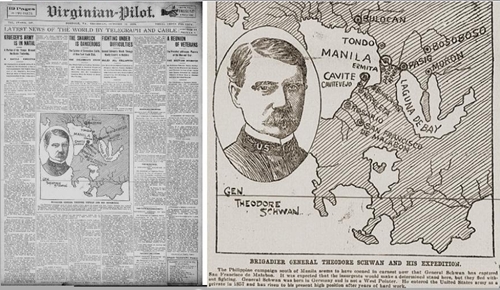 On October 13, Schwan and his men returned to Bacoor. The abandoned towns were at once reoccupied by the Filipinos, who took their position again at various points on the line from Bacoor through Cavite Viejo and Noveleta to Rosario.

Schwan was born in on . His family immigrated to the in 1857. He  was awarded the Medal of Honor during the American Civil War and also served with distinction in the Spanish-American War.

He passed away on May 27, 1926 and was buried in Arlington National Cemetery. 4th Infantry troops in camp near the church at Imus, Cavite Province, 1899 Spanish POWs held by the Filipinos and freed by US forces in Cavite Province. The Philippine army took about 11,000 Spanish prisoners, consisting of 9,400 soldiers, 1,500 civil servants and 100 friars.

[On Nov. 15, 1901, Francisco Braganza, a Major in the Philippine Army, was hanged by the Americans in Nueva Caceres (now Naga City), Camarines Sur Province. He was found guilty of murder for ordering the massacre of 103 Spanish POWs. The Treaty of Paris of 1898 had obligated the US to employ its best efforts to return the Filipinos' Spanish prisoners to Spain. On Feb. 23, 1900, at or near the village of Baliuag, Minalabac town, Camarines Sur Province, upon the approach of an American detachment, Major Braganza ordered 173 Spaniards to be bound at the elbows with cords drawn across their backs,  led off in groups of ten men, more or less, to the rice fields, then at his signal were put to death with clubs, spears, daggers and bolos. Seventy of the prisoners managed to break free and reached safety within the American lines.]