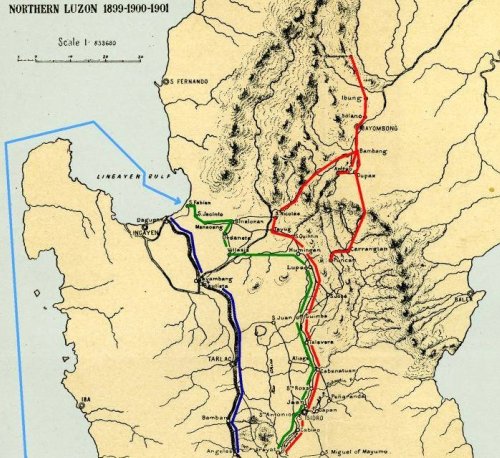 In October 1899, the Americans launched a campaign intended to cut Emilio Aguinaldo's northward retreat and trap his remaining conventional forces. The 3-pronged attack consisted of Lawton's command (red and green lines) moving northeastward to cut off any possibility of Aguinaldo's army heading east to take refuge in the mountains;  Wheaton's command (light blue line) steaming from Manila around the northwestern edge of Luzon, coming through Lingayen Gulf and landing at San Fabian, Pangasinan Province, to block roads heading north; and MacArthur's command (dark blue line) moving northwestward along the Manila-Dagupan railroad from Angeles to Dagupan, Pangasinan Province, to push Aguinaldo into the pocket created by Lawton's and Wheaton's forces.

At this time, Aguinaldo was at the southern Pangasinan town of Bayambang. 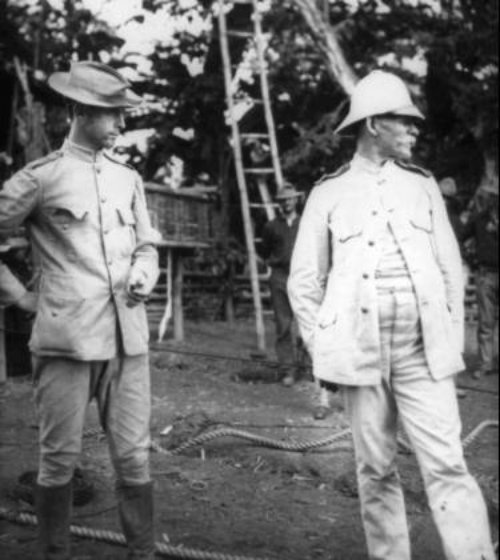 On October 12 a strong column, under Maj. Gen. Henry W. Lawton, with Brig. Gen. Samuel BM Young commanding the advance, commenced the northerly movement up the Rio Grande de la Pampanga from Arayat, Pampanga Province, driving the Filipinos before it to the northward and westward. Lawton's men negotiating a waterlogged road between Arayat and Cabiao Lawton's men halt at a muddy road between Arayat and Cabiao

On October 19, Lawton's column recaptured San Isidro, Nueva Ecija Province. It was rainy season in the country. The Americans had taken San Isidro in May 1899 but did not occupy the town.

On October 27 Cabanatuan, Nueva Ecija Province, was occupied and a permanent station established there. On November 1, the Nueva Ecija towns of Aliaga and Talavera were occupied. In the meantime detachments, chiefly of Young's cavalry, were operating to the west of the general line of advance, striking Filipino parties wherever they were found and driving them toward the line of the railroad. Original caption:  "The gunboats bombarding San Fabian preparatory to the landing of the troops." PHOTO was taken on Nov. 7, 1899.

On November 6, with Lawton's column well under way, Brig. Gen. Loyd Wheaton sailed from Manila with 2,500 men, and with the assistance of cruisers and gunboats under Commander Henry Knox, US Navy, landed at San Fabian on November 7, and drove the Filipinos from their entrenchments around the town, killing 2, wounding 2, capturing 35 and releasing 20 Spanish prisoners.

Original caption:  "The Gatling Gun on the beach at San Fabian." [An aged Filipino picked up in a field a little child who had been wounded by one of the shells from a gunboat. He carried the child in his arms to the hospital that the Americans had established in the church at San Fabian. The Americans gave him a pass back to his farm, and on his way he was hailed by a sentry on one of the 33rd Infantry's outposts. The sentry shouted "Halt!" three times, but the old man, who probably had never heard the English language spoken, would not stop.The sentry shot him through the heart, killing him instantly.] 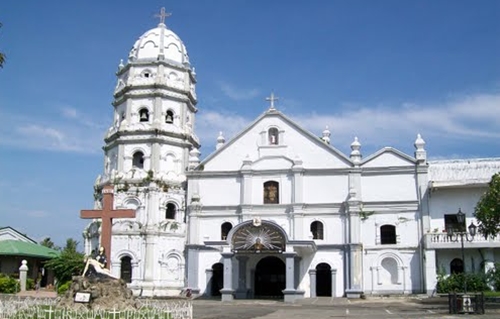 Brig. Gen. Arthur C. MacArthur, Jr., and staff advancing to the north on a freight train.

On the same day, Aguinaldo ordered his men to repair the road leading to the pass near Tayug in the northeast; the pass led to remote Bayombong, Nueva Vizcaya Province, in the forested Cagayan Valley, where he planned to establish a new base. His equipment and supplies preceded him in Tayug. However, the Americans got wind of Aguinaldo's order. A part of Lawton's force was directed to take Tayug.

Meanwhile, on November 10, Companies B, G, E and H, 33rd Volunteer Infantry Regiment (part of Wheaton's expedition), under Maj. Peyton C. March, attacked a party of Filipinos 600 strong under Colonel Carlos about 2 1/2 miles (4 km) from San Fabian on the Mangaldan road, and dispersed the whole force, killing 70, including Carlos. The Americans suffered 2 killed. Nov. 11, 1899:  The bridge at Bamban, Tarlac Province, destroyed by the Filipinos to prevent General MacArthur from closing the pincer on President Emilio Aguinaldo, who, at this time, was being assailed in northern and eastern Pangasinan Province by Generals Wheaton and Lawton. General Manuel Tinio (LEFT), who was based in the far north at Vigan, Ilocos Sur Province, was sent south to San Jacinto, Pangasinan Province, to block Wheaton's advance and delay his pursuit of Emilio Aguinaldo. Tinio put up entrenchments about a mile west of the town.

Both sides had roughly 1,200 men. Tinio and his men were forced to withdraw. Monument marking the spot where Maj. John H. Logan was killed at San Jacinto. This photo was sent to his mother by Maj. Gen. Leonard Wood, then Governor-General of the Philippines  (1921-1927).

A battalion commander, Maj. John H. Logan (RIGHT, in 1899), was among the American dead. He was a son of the late General and Senator John A. Logan of Illinois.

[A bronze and steel marker put up by the Americans to commemorate his death still stands in barangay Macayug, San Jacinto.]

The Filipinos regrouped in Pozorrubio town and set up their defenses in barangays Dilan and Malasin.

President Emilio Aguinaldo's newspaper printing machinery seized by the Americans in Tayug, Pangasinan Province, on Nov. 11, 1899.   In addition, the Americans captured 13 carts with Filipino war  records, several hundred thousand pounds of rice, 3,500 pounds of flour,  7,500 pounds of salt, 1,300 uniform coats, many blankets and other articles of clothing. They also captured several Filipino army officers and liberated 69 Spanish and 2 American prisoners.  PHOTO was taken in front of the US army printing office in Manila.

On November 11, Lt. Col. Henry W. Wessels of the 3rd US Cavalry (part of Lawton's forces) attacked and captured Tayug; at the latter, the Americans also found a letter written by Aguinaldo indicating that his treasury and certain valuables would be sent to nearby San Nicolas and over a mountain trail to Bayombong. US troops were pushed out to San Manuel and Binalonan and a troop dispatched to capture the treasure.

The capture of Tayug and San Nicolas effectively blocked  Aguinaldo's passage to the east and northeast.

From Bayambang, Aguinaldo decided to go north in the direction of Pozorrubio. He would attempt to slip through the 20-mile (32 km) open gap between San Fabian and Tayug.

On November 12, MacArthur seized the town of Tarlac in Tarlac Province. 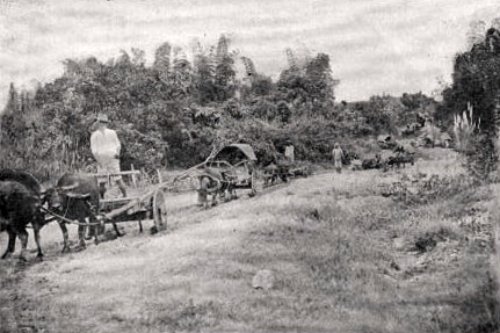 By November 13, Lawton's advance had turned to the westward, having captured San Jose and Lupao in Nueva Ecija Province, and the Pangasinan towns of Umingan, San Quintin, Tayug, and San Nicolas.

In the evening of the same day, Aguinaldo and his entourage left Bayambang by special train for Calasiao (10 miles, or 16 km by road from the American headquarters at San Fabian); from Calasiao, they marched and reached Pozorrubio at 6:00 p.m. on November 14. Aguinaldo, his wife Hilaria, and son Miguel stayed the night in the house of Apolinario Salcedo.

On November 15, at about 9:00 a.m., Wheaton's troops attacked Pozorrubio. While the Filipinos stalled the Americans, Aguinaldo and his entourage escaped northward for La Union Province. Brig. Gen. Samuel BM Young, who was in nearby Binalonan town, could have blocked  Aguinaldo's escape from Pozorrubio, had not his Filipino guide deliberately misdirected the American cavalry. The guide led the Americans westward to Manaoag via what is now the town of Laoac instead of going northward and straight to Pozorrubio.

An American correspondent reported, General Wheaton sent General Lawtons division, spearheaded by Brig. Gen. B.M. Young to intercept or capture Aguinaldo in Pozorrubio. Frantically they pressed forward from Binalonan to Pozorrubio, the next town led by a native guide. Were they on time?"

The only reason that the guide who led us to Manaoag instead of Pozorrubio was not shot was because he could no longer be found..

Nevertheless, General Wheaton noted "the unusual courage and spirited resistance put up by the Filipino troops in San Jacinto and Pozorrubio."

By November 18 Lawton's advance had occupied Asingan and Rosales, and was moving on Pozorrubio, about 12 miles (20 km) east of San Fabian. His forces now held a line of posts extending up the eastern side of the Pangasinan plain and curving around and across the northern end to within a few miles of the Gulf of Lingayen.

Wheaton linked up with MacArthur's column at Dagupan on November 20. Inexplicably, although Wheaton had captured San Fabian on November 6 and Lawton's men were in Tayug by November 11, Wheaton did not link up with them. This allowed their quarry, President Aguinaldo, to slip through the open gap. Consequently, on November 17, three days before Wheaton and MacArthur met up, Aguinaldo had already reached the upland town of Naguilian, La Union Province, 20 miles (32 km) up the road from San Fabian. At Naguilian, a band of music, all the leading men, and a great crowd of people turned out to meet Aguinaldo and his party. Brig. Gen. Arthur C. MacArthur, Jr., and staff at the headquarters of the 2nd Division, 8th Army Corps in Bautista, Pangasinan Province. The HQ was established on Nov. 24, 1899.

"When I first started in against these rebels, I believed that Aguinaldos troops represented only a faction. I did not like to believe that the whole population of Luzonthe native population that iswas opposed to us and our offers of aid and good government. But after having come this far, after having occupied several towns and cities in succession, and having been brought much into contact with both insurrectos and amigos, I have been reluctantly compelled to believe that the Filipino masses are loyal to Aguinaldo and the government which he heads."