A portion of the 1st California Volunteer Infantry Regiment that arrived in Cavite Province on June 30, 1898 On July 17 and 31, the second and third expeditions, under Brigadier-Generals Felix V. Greene and Arthur C. MacArthur, Jr., respectively, arrived in Cavite harbor and were transferred to Camp Dewey, the transfer being completed about August 9.

By this time, 470 officers and 10,464 infantry troops had been stationed in the country.

The incident took place on July 17, 1898.  The Spaniards in Manila, according to the Diario de Manila, looked on the Germans as being their friends and sympathizers, and the advent of Germany's fleet as encouragement to Spanish interests. The Germans saluted the Spanish flag on several occasions after Admiral Dewey established his blockade. Neither the English nor French saluted the Spanish flag, and only in one instance did the Japanese salute it.

July 19, 1898;  More landings of American troops near Manila, and positions of US and foreign ships. [Illustration from The San Francisco Call, issue of July 23, 1898.]

Maj. Gen. Wesley Merritt (West Point class 1860), who had been assigned to the command of the newly created Department of the Pacific, as well as of the 8th Army Corps, assumed command of the US forces upon his arrival on July 25.

He found General Anderson's headquarters, with the California Heavy Artillery, 14th and 23rd United States Infantry, and the 2nd Oregon Volunteers, at Cavite; while General Greene was encamped with his brigade at Camp Dewey. 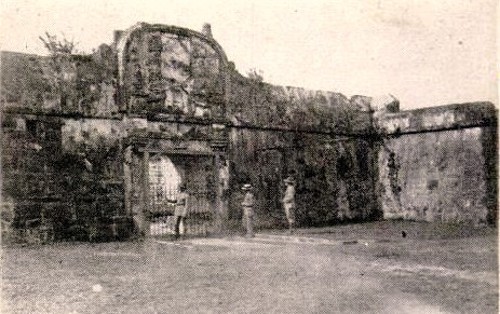 The left, or north, flank of General Greene's camp extended to a point on Calle Real (now M.H. Del Pilar St.) about 3,000 yards (meters) from Fort San Antonio de Abad (ABOVE, in February 1899), a polvorin or powder magazine close to the beach at the southern end of Malate, which formed the right extremity of the outer line of the Spanish defenses of Manila. From Fort San Antonio de Abad the Spanish lines extended to the left, eastward, in trenches and blockhouses, through swamps and ricefields, encircling Manila and covering all avenues of approach from the land side.

Spanish barricade at Malate, Manila. Photo was taken after the battle. An old muzzle loader that the Filipinos captured, and placed in their trenches in front of Fort San Antonio de Abad, Malate, Manila.

The Filipinos occupied positions facing these lines throughout their extent. On Calle Real (now M.H. Del Pilar St.) , the road passing Camp Dewey parallel to the beach, the Filipinos had established an earthwork about 800 yards from Fort San Antonio de Abad. They also had possession of the approach by the beach proper, and occupied the Pasay-Manila road, parallel to Calle Real, and about 700 yards to the eastward of it. The outposts of General Greene's camp were posted in rear of the Filipinos.

The Filipinos were persuaded to withdraw from Calle Real in order that the American troops could move forward; the former moved to the east of Calle Real, and the trenches from the beach to Calle Real were occupied by Greene's outposts on July 29. On the right were detached barricades occupied by the Filipinos, extending over to the rice swamp just east of the Pasay road. 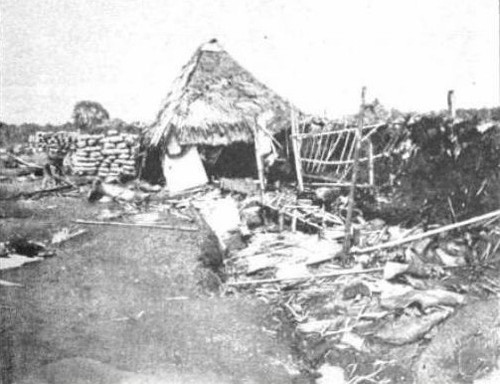 Spanish entrenchments near Manila. Photo was taken after the battle.

Facing these, the Spanish works of earth and sand bags, 7 feet high and 10 feet thick, stretched to the eastward, with a slightly concave trace, to Blockhouse 14, a strongly fortified position on the Pasay road, and distant about 1,200 yards from Fort San Antonio de Abad, thus enveloping the American right. Seven guns were mounted in the stone fort on the Spanish right, and two steel 3.2-inch mountain guns near Blockhouse 14; the line was manned throughout its length by infantry, with strong reserves in Malate and Intramuros. Spanish soldiers in Manila. Photo was taken in 1898

On July 31, shortly before midnight, the Spaniards opened a heavy and continuous fire with infantry and artillery from their entire line.

US soldiers using a cannon at Manila, 1898

Battery H, 3rd Artillery, the 10th Pennsylvania Volunteers, and 4 guns of batteries A and B, Utah Artillery were in the trenches at the time and sustained the attack for an hour and a half, being reinforced by 1 battalion of 1st California Volunteers and Battery K, 3rd Artillery. The firing ceased at about 2 A. M. The casualties on the American side were 10 killed and 43 wounded.

US soldiers gather around the remains of a comrade killed by Spanish fire, 1898

The brigades and their components: 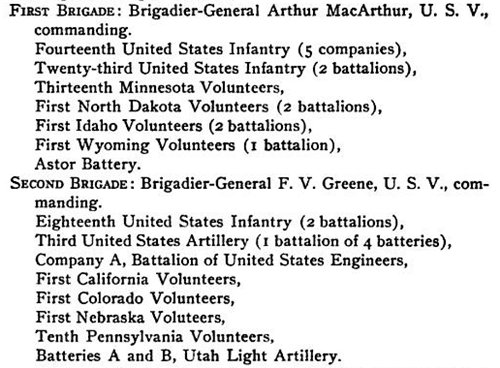 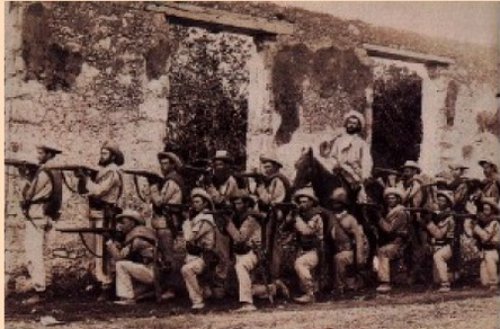 On the nights of August 1, 2, and 5, the Spaniards opened up again with infantry and artillery fire; one American soldier was killed. 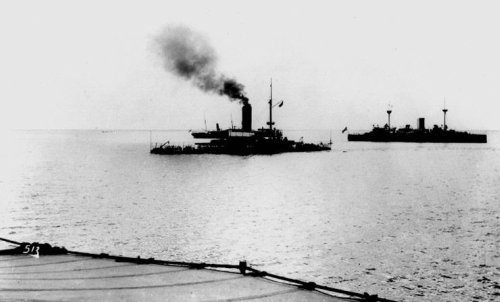 The USS Monterey (CENTER) and the USS Charleston (RIGHT) at Manila Bay.

On August 7, General MacArthur's brigade being in position, and the USS Monterey, for which the navy had been waiting, having arrived, General Merritt and Admiral Dewey sent to the Spanish Governor-General in Manila a joint letter warning him to remove all non-combatants from the city within 48 hours, and notifying him that operations against Manila might begin at any time after the expiration of that period.

The Governor-General replied that on account of being surrounded by the Filipino forces there was no place to which they could safely send their sick, wounded, women, and children.

Merritt and Dewey purposefully left Emilio Aguinaldo out of any plans and preparations regarding the capture of Manila. On August 9, a formal joint demand was made for the surrender of Manila, based upon the hopelessness of the Spanish situation without possibility of relief, and upon considerations of humanity dictating the avoidance of the useless sacrifice of life entailed in an assault and possible bombardment.

The Spanish cause was doomed, but Fermín Jaudenes (LEFT, in 1898), who had replaced Basilio de Agustin as Governor-General on August 4, devised a way to salvage the honor of his country. Negotiations were carried out through Belgian consul Edouard Andre.

A secret agreement was made between the governor and American military commanders concerning the capture of Manila.

The Spaniards would put up only a show of resistance and, on a prearranged signal, would surrender. In this way, the governor would be spared the ignominy of giving up without a fight. American forces would neither bombard the city nor allow the Filipinos to take part; the Spanish feared that the Filipinos were plotting to massacre them all.

A Filipino is executed by garrote, a strangulation machine. The garrote consisted of a brass collar with a back piece pushed forward by the impulse of a big screw working through a post. The neck of the condemned was placed in the brass collar, and when the executioner turned the handle of the screw, the back piece in the collar pressed against the top of the spine, thereby snapping the spinal cord. PHOTO was taken in 1898.

For centuries the Spanish had ruled the with a heavy--often deadly--hand. They considered the Filipino people to be ruthless, uncivilized, and sub-human. There was great fear that if the city fell to Aguinaldo and his revolutionary forces, there would be hell to pay.

The Spanish army's Company 3, Casino Club Corps, in the Philippines. Photo taken circa 1898. Spanish soldiers in live fire practice at the Luneta, Manila The Santa Lucia Gate of Intramuros, the walled district of Manila Old bronze cannons at Intramuros, the walled district of Manila Filipino soldiers, their artillery and 2 Americans in Malate district, Manila. Photo was taken on July 1, 1898.

On August 11, a Filipino regiment in the Spanish army was suspected of being about to desert. The Spanish officers picked out six corporals and had them shot dead. Next night the whole regiment went over to Aguinaldo's army with their arms and accoutrements.

US soldiers in a trench before Manila, 1898

On August 12, fighting between American and Filipino troops almost broke out as the former moved in to dislodge the latter from strategic positions around Manila. Brig. Gen. Thomas Anderson telegraphed Aguinaldo, "Do not let your troops enter Manila without the permission of the American commander. On this side of the Pasig River you will be under fire."