President William McKinley controlled all the information coming from the Philippines. On Feb. 6, 1899, after he reported to the American people that the Filipinos had attacked US troops in Manila, the U.S. Senate ratified the Treaty of Paris by one vote more than the necessary two-thirds (57 to 27). The American public tacitly endorsed the ratification by reelecting Mckinley in 1900.

When the treaty was signed on Dec. 10, 1898, it had to be ratified by the U.S. Senate before it could take effect. It, however, met opposition, mainly against the annexation of the Philippines.

An Anti-Imperialist League was formed to rally American public opinion against the annexation. Many League members felt empires were anti-democratic and a violation of the nation's heritage. Some union leaders argued that overseas empire would only feed the overwhelming power of big business. Some prominent Americans, such as former President Grover Cleveland, the writer Mark Twain and industrialist Andrew Carnegie, also opposed the ratification. The latter even offered to buy the Philippines for US $20 million and give it to the Filipinos so that they could be free; he believed the U.S. should exercise global economic power Attitudes about race divided the anti-imperialists. Some opposed annexation because they did not want a "primitive race" to join the U.S. Others,  including many African Americans, suggested that U.S. talk of "uplifting" the Filipinos was hypocritical; at home, they argued, the U.S. was not even trying to protect the rights of black citizens. There were also many in the United States who saw the advantages of taking over the Philippines. Many Protestant missionaries, for instance, favored annexation.  They felt the U.S. was duty-bound to educate and "christianize" the islands, not realizing that most Filipinos were already Catholic.

Some people feared that Germany or another European power might get the Philippines if the United States did not. Newspapers had painted the Filipinos as primitive "savages"; consequently, many Americans came to believe they  could not govern themselves or defend themselves against threatening European powers. 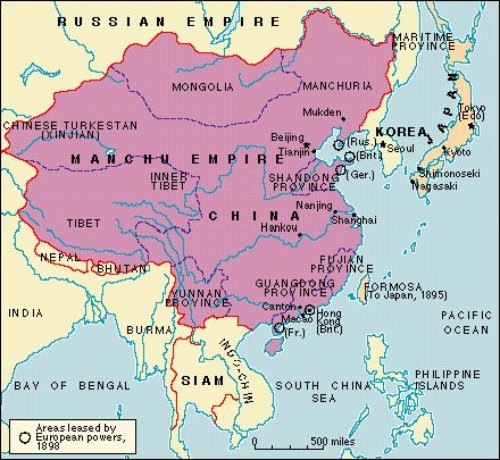 There were those who favored annexation to give America a foothold in the populous markets of Asia. They pointed to the Philippines' value as a coaling station for U.S. ships; and as a stepping stone for American exporters with an eye on the "Great China Market."

A group of prominent bankers, industrialists and politicians convinced high government officials that the U.S. economy faced stagnation, widespread unemployment and possibly revolution unless moves were made to penetrate Asian markets. Senator Albert Beveridge observed: "American factories are making more than the American people can use; American soil is producing more than they can consume. Fate has written our policy for us . . . . The Philippines give us a base at the door of all the East . . . . The power that rules the Pacific . . . is the power that rules the world ....The mission of our race [is to control] the trade of the world....and the Philippines logically are our first target."

"Self-government," Senator Beveridge said, "applies only to those who are capable of self-government. We govern In the 1900 presidential election, the Anti-Imperialist League supported William Jennings Bryan, the Democratic candidate, who opposed the annexation of the Philippines. 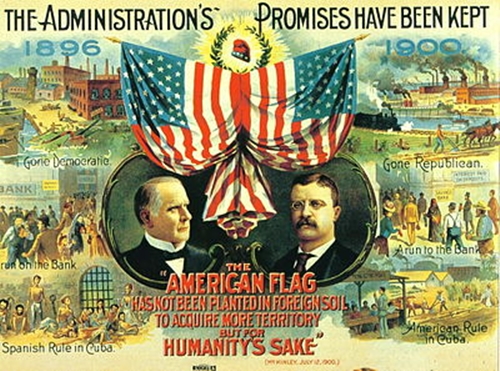 But rising prosperity and patriotic support for U.S. soldiers helped McKinley to victory.

April 11, 1899:  John Hay, Secretary of State, signs the "Memorandum of Ratification" of the Treaty of Paris on behalf of the United States. 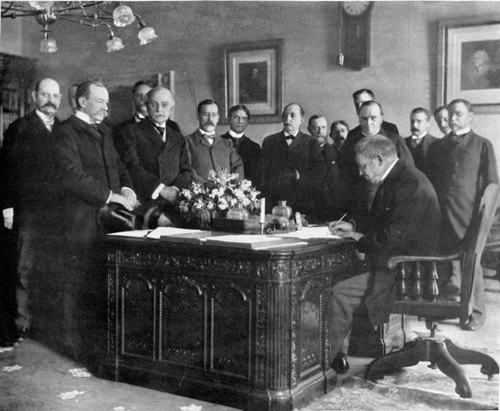 April 11, 1899:  Jules Cambon, the French ambassador, signs the "Memorandum of Ratification" of the Treaty of Paris on behalf of Spain.

May 1, 1899:   John Hay, U.S. Secretary of State, hands to French ambassador Jules Cambon the $20 Million due to Spain under the Treaty of Paris. Photo was taken at the State Department, Washington, D.C.